We already know which channel LaLiga will broadcast openly. The problem is now in the Second Division

After several weeks of negotiations and offers that did not arrive, of LaLiga waiting for a second round to fulfill their economic aspirations and that the resolution of who would broadcast open football from August finished arriving, the daisy has been stripped: It will be GOL who broadcasts that match openly on television every weekend.

Lot 4 was the one that included that LaLiga Santander match, with an important nuance: cannot include any team that is playing in a European competition in that season, nor Real Madrid, Barça, Valencia or Atlético de Madrid, regardless of whether or not they play in Europe in that season, team case that for 2022/2023.

LaLiga open in GOAL, with nuances in the clubs

With a reserve price of four million euros, it did not receive any bids in the call that expired at the end of May… but this time, it was Mediapro who was awarded the free-to-air football that remains outside the exclusivity of Telefónica and DAZN for the rest of the matches, that is, the one that can be seen on GOL. He also keeps lot 6, which includes the summaries of those matches.

With the final classification of the 21/22 league, there are eight clubs whose matches cannot be seen openly, coinciding both with those with the largest social masses and with those belonging to larger cities in most cases. This is the distribution: 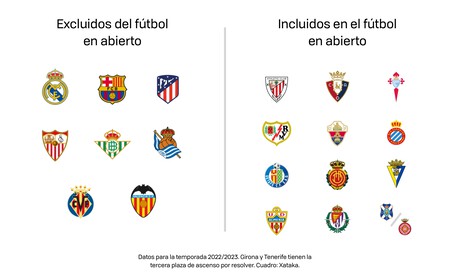 Any match played by a team from the eight on the left will be broadcast exclusively by Telefónica and DAZN (the latter having half the number of matches than the former). The matches between the twelve teams in the second draw will be the ones that can be seen by GOL, at the rate of one per day. It remains to be resolved whether the third club to be promoted to LaLiga Santander will be Tenerife or Girona. This limitation for lot 4 is the one that presumably has delayed the longest, until mid-June, the offer that has satisfied both parties.

Precisely the second division that both want to promote, LaLiga SmartBank, is the one that finally has not received offers for lot 5 that brings together its matches and can only be seen on payment platforms. This lot was being sold for one million euros as a reserve price.

In any case, that of open football is a case required by the Law on Sports Retransmissions since 1997 (article 5.1), and that without this mandatory component, very possibly it would not even happen anymore. For many years we have been seeing requests to modify that snippet of the law, since LaLiga considers that they could better monetize the competition without this requirement.

On the one hand, LaLiga has achieved its purpose with the second round of marketing. He had several options on the table after the absence of a satisfactory offer, and chose to repeat the process, with success for the first division. On the other hand, the final absence of offers for the second division, which will be fully paid.

In the last auction of the broadcasting rights won by Telefónica and DAZN, they managed to increase revenue by 1% to close to 5,000 million for five seasons, in part by including that open game also for these private broadcasts: the obligation is to broadcast a open match, but it does not have to be granted exclusively.

Do you have little time? 7 series with 15-minute episodes

The DGT puts the spotlight on car sharing: these are its tips so you don’t get fined

Ruin of Telefónica in a hurry. Recover 34 million after investing about 1000