The new technological leap puts things ahead of the competition, and by 2025 we will have 30% more efficient chips than those made with the N3E node. Best of all, the latter are not even on the market, so the comparison with current 5nm chips will be even more advantageous.

More power, but above all more efficiency

The N2 node will be the first to use its ‘nanosheet’ transistors (GAAFETs, for Gate-All-Around Field-Effect Transistors), and the benefits will be especially tangible in the realm of efficiency: at equal performance, N2 chips will consume 30% less power than N3E. The latter already consumed 34% less than the N5 used for example in the Apple M1. 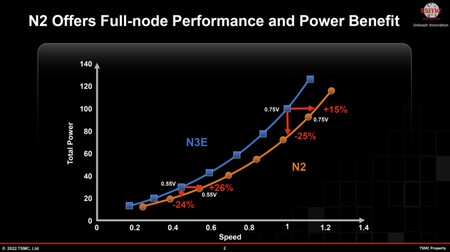 What does that mean? well some noticeable improvements which we will foreseeably see at the end of 2025. By then we will foreseeably have some hypothetical and promising “Apple M4” that could make use of this technology, like other processors from other manufacturers.

as they indicate en AnandTechthe improvement in efficiency is great, but things are not so remarkable in the field of chip density: achieve 10% more density between the N3E and N2 generation of chips it is somewhat disappointing for components such as GPUswhich improve mainly by growing their die and integrating more and more transistors into it.

The news makes it clear how TSMC will continue to lead of chip manufacturing for years to come. Intel, which is trying to regain ground in this market, recently announced its ‘Intel 4’ node for 2023, and theoretically by 2025 they will already produce their ‘Intel 3’ node.

We will see how the chips of one and the other -or those of Samsung, which of course is also in the battle- perform in power and efficiency, but course the race is exciting.

We can get into the car, but not drive it: Cabify brings Renault’s peculiar subscription model to Spain