We must bear in mind that when we add a font to Photoshop we will also add it to the rest of the programs that we have installed on the computer. Also, it will be enough to install them once so that we can now use them as many times as we want in the different programs on our PC.

Before explaining how to install fonts in Photoshop, we should be clear about what a typeface or font is, but also what the differences are between them.

What is a typeface or font

Typefaces or fonts, to be easily understood, are the designs, appearances and dimensions of symbols, numbers and letters. The operating system, either Windows 10 or earlierit already has a series of pre-installed fonts such as Arial, Comic Sans MS or Times New Roman, and many others that practically any user knows and could recognize at a glance.

However, on the Internet we can find thousands and thousands of fonts and fonts of various types, which can complement or complete our creative work when we put ourselves at the ‘control’ of Photoshop.

in an operating system OTF, TTF, or Type 1 fonts are used. The difference between TrueType and OpenType is that the former was created by Apple, to compete with the Type 1 format, which is from Adobe. And it has its origins in the late 1980s. The key to it is that it allowed more control over the shape of the letters, while TrueType fonts are formed with vector elements not PostScrypt. But why do we have them on Windows? Because Apple sold a license to Apple, and they are compatible since Leopard.

OpenType is based on TrueType, which was described through curves that a tracker converts to a bitmap for each body; Before rasterizing, fonts are snapped to an output grid, thus preventing loss of quality. In OpenType, its ‘successor’, the structure is complemented with data tables that give the option of incorporating advanced typographic and linguistic functions into a font. OpenType is compatible with all operating systems and is the most recommended format, due to the availability of symbols, accents or the letter ‘ñ’ itself.

How to install fonts in Photoshop

There are two options to install fonts on your computer and use them later in Photoshop: Install them one by one or install them in bulk using the files that we have previously downloaded.

Install one by one

From Windows 10 and higher it is much simpler install fonts on our computer and later view or use them in Photoshop for our designs. Once we have downloaded the fonts we want from specialized pages (like some of the ones you will see below) we must look for the file that we have downloaded to our computer. When we download a font, it will be saved on our computer in a .zip file and inside the compressed folder we will find the TrueType font file or the OpenType file, depending on the typeface and the website from which we download it.

We simply have to double click on the file that interests us, a window will open on our computer and we will see two buttons at the top of the window: print and install. Tap on “install”.

At that moment A window will appear in the center of the screen, as you see in the screenshot below, which tells us that the source is updating. When a few seconds have passed, it will have been installed correctly and we will be able to use it in Photoshop.

We will only have to go to Photoshop and look for it… We go to the text section of Photoshop and at the top of the web page we open the font dropdown. Here we look for the font that we just installed and we can start using it. We will have already installed the font and we can use it as many times as we want in as many designs as you want until you remove it from the web.

Another option is to install fonts in bulk that we have downloaded. Here we are not going to go one by one by tapping on the “install” as we have done before but we will have to download as many sources as we want. We can download ten, twenty or thirty different fonts that interest us for a project and install them in Photoshop all at once without having to open the file one by one.

The first thing we must do is download all the fonts on our computer. Once you have them, we unzip them from the zip file and we keep them in the same folder that allows us to have them located. From the corresponding folder, we select all the files that interest us.

Once we have done it, we go to the Windows fonts folder. To do this, we go to the local disk of our computer and look for the “Windows” folder. Once inside Windows we will see many different folders and we have to search for “Fonts”, which we will identify by the name or by an A in the folder icon. We open the folder “Fonts” from our computer and we return to the files that we had previously downloaded and decompressed. We select all the new fonts and drag them to the “Windows Fonts” folder.

You will see a window that tells us how many fonts are being installed and how long it will take for the process to complete. 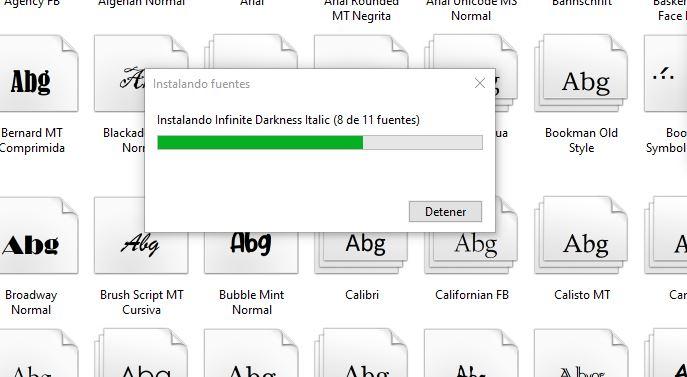 When finished, they will all be ready and we will only have to open Photoshop to verify that they have been installed correctly. You choose the one that interests you and you can start writing or designing with them.

Although there are many websites where you can download fonts, there are some especially recommended such as Dafont, for example. In DaFontfor example, with a search by categories we can easily find the font we want and, in addition, they have a text box to write what we want and, before downloading, have a preview how the text will be displayed with that font. Once we are clear that we want that font, we download it in a ZIP folder that we will decompress to keep the file that interests us.

But it is not the only one. There are others like 1001 free fonts. There are more than 10,000 fonts among which you can choose if you want to customize any design. And it allows us to easily find what interests us. You can choose them in alphabetical order, use the different categories, explore the newest or the most used… You’re a writer? Try your luck on these 6 literary contest websites

HBO continues to squeeze ‘Game of Thrones’: we will have a direct sequel starring Jon Snow

HBO continues to squeeze 'Game of Thrones': we will have a direct sequel starring Jon Snow

Huawei S-TAGs are motion sensors for runners and cyclists (and no, they don’t compete with AirTags)

The millions of chickens we eat each year consume too many antibiotics. There is an alternative: cannabis