We have just solved the greatest mystery in the history of medicine: the place where the black plague began

A few years ago, while exploring the vicinity of Lake Issyk-Kul in present-day Kyrgyzstan, John Krause y Philip Slavin they realized that the cemeteries were filled with a disproportionately high number of people who died between 1338 and 1339. Something had happened in the Chu valley, that was clear; but his surprise was much greater when on some of the tombstones they found the word “pestilence”. Had they just found the origin of the greatest plague in the history of Europe?

couldn’t be. It was obvious that it couldn’t be. The first documented case of the ‘black plague’ dates back to 1346 from Caffa on the Crimean peninsula while it was being besieged by the Mongol army. Precisely they were the first affected. From there, between 1347 and 1351, the disease he followed life of about 70 million people worldwide. We are talking about a world very different from this: one in which the most populous states, areas such as France or Italy, barely added 16 million.

There were cities, counties and regions that lost up to 80% of its population. The economic, demographic and cultural blow It was so huge that even today it is difficult to imagine. Was it possible that it had emerged ten years earlier in Kyrgyzstan? 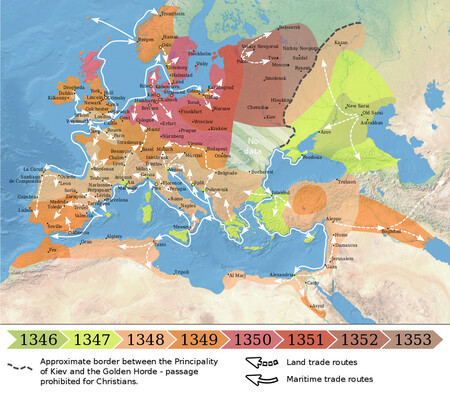 The expansion of the Black Death year after year.

One of the great mysteries in the history of medicine. For centuries, scholars have scoured historical records trying to find the origin of the disease without success. The question, in fact, was still open. In recent decades, researchers have used the full potential of ancient DNA and modern genomics, but the geographic origin of the Black Death remained uncertain.

All started here? Coming across cemeteries in the area, Krause and Slavin got down to business. The team has translated and analyzed the little archival data that has survived and have combined it with DNA analysis of seven people buried at the site.

Los results seem clear: Yersinia pestis, the plague bacterium, was in three of the DNA samples and analysis suggests that it played a role in the epidemic event that devastated the population in the area. In fact, according to the authors, when analyzing the genomes of Y. pestis They found that everything seemed to indicate that it is the common ancestor of all the other strains that have been found over the centuries.

How did it get to the rest of the world?. Also, based on historical data and remains, (things like inscriptions on tombstones or coins stored in treasuries), the authors believe that until that time the region was quite connected commercially with the rest of Eurasia. In fact, it seems that it was the colossal impact of the epidemic that caused the region to fall into a huge crisis and become “disconnected” from the rest of the continent. This would explain not only the spread of the disease, but also why no one has looked there until recently.

11 Good Movies You Can Watch for Free on Pluto TV

Workaholism as a business model: what Musk’s email reveals about his entrepreneurial vision