Intel has introduced its first Arc graphics card for desktop computers. It’s about the Intel Arc A380, a modest proposal that joins a growing family. Although it was not conceived for the gamingpromises to do a good job with popular titles, preferably with medium quality settings, so it is not a recommended option for the most demanding users.

The truth is that the semiconductor giant, which plans to compete with Nvidia and AMD, is delivering on its promises. When it announced the launch of Intel Arc, it said that the first dedicated graphics cards would arrive in 2022. Thus, it took a first step in March this year with its first dedicated graphics solution for laptops, and now it is the turn of desktop computers.

as collected VideoCardzthe Intel Arc A380 incorporates 6 GB of GDDR6 memory, has a 96-bit bus and connects to the computer via PCI Express 4.0. This model, which as we mentioned above is very modest, has 8 Xe cores, 8 ray tracing units and 4 MB of L2 cache. The clock frequency is 2,000 MHz and it has a base TDP of 75 W. 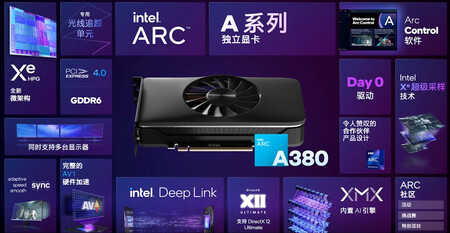 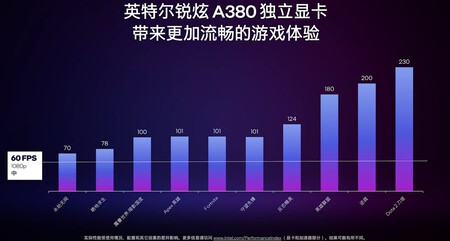 This new graphics card has support for DirectX 12 Ultimate and hardware ray tracing. As we can see in the image above, Intel promises that we can play 1080p and 60 FPS to a good number of titlesamong which are ‘PUBG‘, ‘Fortnite‘, ‘League of Legends‘ y ‘Dota 2‘. In addition, the company claims that it will perform 25% better than the Radeon RX 6400but we should note that this is one of AMD’s more modest alternatives for gaming.

On the other hand, this Intel proposal, like the others in its family, benefit from technology Xe Matrix Extensions (XMX). The essence of this is to enhance video editing and transmission tasks, so it can be a feature that is widely used by streamers and content creators. In addition, it has Deep Link technology, which improves the work between the processor and the graphics card.

The new Intel Arc A380 will be available starting this month in China and later in other parts of the world. It will first reach assemblers and then computer manufacturers. The only price that is known so far is the recommended price for the Asian country, which is 1,030 yuan, that is, about 147 euros to change.

According to Tom’s Hardware, Gunnir is the first brand to sell it. His proposal has a shell in black, gray and blue. At the connection level, it has three DisplayPort ports and an HDMI 2.0 port. For now we have to wait for the arrival of this graphics card to the European market, through different manufacturers. But that’s not all, throughout the year we should also have news of the higher series, the Arc 5 and Arc 7.

In Xataka | The NVIDIA GeForce RTX 4000 are getting closer. Rumors about his performance are even too good

‘Teenage Mutant Ninja Turtles: Shredder’s Revenge’: the pixelated charm of the best brawlers of the 80s

'Teenage Mutant Ninja Turtles: Shredder's Revenge': the pixelated charm of the best brawlers of the 80s

Amazon has a new interface for your Fire TV Stick