Be careful with this: not all miMovistar mobile lines are the same

Movistar’s convergent rates have always offered a very high level of benefits. Movistar Fusión has been with us for many years giving the best of itself, but for a few weeks now it has given way to miMovistar, the new convergent offer from the blue operator. This is very modular and allows the consumer to do only with what he needs. All miMovistar rates include mobile lines, although these are not the same. We tell you how they differ.

As we say, the rate of miMovistar is modular and is built from 3 different bases. All these bases include, as we will see below, two mobile lines. These are relatively similar, although they have differences that it is important to take into account.

Not all mobile lines are the same

The 3 modalities that we have to choose from at the beginning of the offer have a main line, except Movistar Ilimitadox2, which, as its name indicates, includes two identical mobile lines. In this case, for 84.90 euros per month, we will take home two mobile lines that have unlimited calls, unlimited data y unlimited smsso in this case we will not find differences between the two lines.

It is from the second modality, called Unlimited Movistar, when we are going to start to find differences. This, with a cost of 69.90 euros per month, offers a single main line that has the same characteristics as those of Unlimitedx2, that is, with unlimited calls, data and SMS. Unlimited Movistar also includes an additional free mobile line that has calls with a 40 cent establishment (VAT included) and 0 cents per minute (maximum 120 minutes per call), 5 GB of data to browse and SMS at 30 centstaxes included. 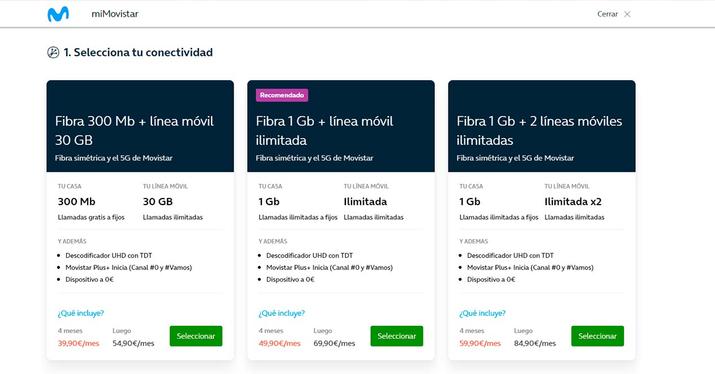 Finally, the Movistar Max modality includes a main mobile line that has unlimited calls and SMS, but in this case it does not have unlimited data, but instead will have 30 GB. The second free additional line has the same conditions as Movistar Ilimitado, so we will pay for the establishment of the call and for the SMS. The 3 modalities currently have a discount for the first 4 months.

One of the best convergents on the market

As we said at the beginning of this article, the move from Movistar Fusión to miMovistar has been one of the operator’s smartest moves in recent years. Now it is possible to build a convergent rate that does not force the consumer to have to contract, for example, a television package if he is not interested. The miMovistar configurator is very clear, and allows us build our perfect rate as if it were a house.

From a base where the fiber and the mobile lines will be (as well as the additional payment lines) we will have to choose which television we want. Of course we are not obliged to take any of this, but if we decide to do so we will have access to all kinds of series and movie channels, as well as the best premieres on the platform. In addition, we will also have access to hire football to see LaLiga (Movistar will be the only site where we can see all the football), the Champions League and other sports, as well as Netflix or Disney Plus. Along with this we will also have the possibility of taking a device at 0 cost or for a monthly payment, as well as other services such as Xbox Game Pass or Prosegur Alarms.

When will you collect Income 2021: how to check the status of its processing

When will you collect Income 2021: how to check the status of its processing

1 Gb fiber: where is it cheaper?