512 floppy drives, 16 hard drives and more: this is The Floppotron 3.0, a hardware “orchestra” that sounds really good

In general, outdated computer hardware is incompatible with modern standards, slow, bulky, and noisy. What for many is a problem or has no use in the current times, is an opportunity and literally music to Paweł Zadrożniak’s ears. We are talking about the Polish engineer who created The Floppotron 3.0an “orchestra” that works thanks to 512 floppy drives, 16 hard drives and 4 scanners.

As the video below shows us in which Julius Fučík’s work ‘Entrance of the Gladiators’ is heard, this set of “computer musical instruments” has the ability to sound harmonically. This is very curious since originally each of the components that make it up were designed for completely different purposes, such as data storage and document digitization.

More than a decade making music with hardware

Floppotron is not a completely new project. The first version of this orchestra debuted in 2011 with two floppy drives and an ATMega microcontroller. The sounds were generated by the operation of the stepper of the floppy drives. Despite its simple setup, Paweł managed to play ‘The Imperial March’ and posted a video on YouTube showing the result.

Perhaps because of the huge impact his first creation had, or because of his desire to make music with obsolete hardware, Paweł introduced Floppotron 2.0 in 2016. The project was enhanced with 64 floppy drives, 8 hard drives, and 2 scanners. All of this with an 8-channel controller built into an ATMega 16, various Arduino boards, and other components. This time it was the turn to listen to ‘We Are the Champions’ de Queen. 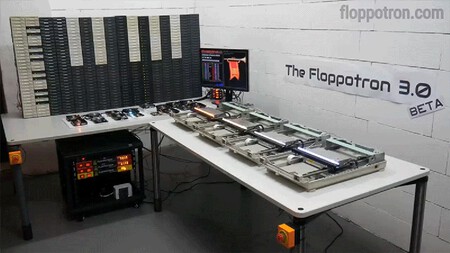 When it seemed that the project was coming to an end, on June 6 Paweł had published a video with the song Time to Say Goodbye, the existence of Floppotron 3.0 was revealed, the amazing setup we see today. “Has its own ‘studio’ space and became a relatively complex device“, assures the creator in a blog post in which he explains all the technical details of his creation.

Paweł points out that Floppotron 3.0 is MIDI compatible, which means you can use any music composition software that works with MIDI. The sequences, he explains, are encoded as MIDI events and placed on up to 16 tracks. Each track can be assigned to a specific section. So some instruments are assigned to floppy drives, others to hard drives, and others to scanners.

In Xataka | Nobody has asked for it, but someone has created a speaker with a liquid that dances with the music

‘Teenage Mutant Ninja Turtles: Shredder’s Revenge’: the pixelated charm of the best brawlers of the 80s

Lenovo ThinkPad and ThinkBook, all-terrain laptops for everyday use

Lenovo ThinkPad and ThinkBook, all-terrain laptops for everyday use

We have found an 8,000 frog bones buried in a prehistoric site. And we don’t know how they got there

The future of OLED is brighter than ever: LG Display already shows 8K panels with up to 2,000 nits