The largest digital camera in the world is in Chile and it is a true prodigy of technology: this is how it works

In an observatory in Chile they are preparing the world’s largest digital camera for the field of astronomy: it is the size of a car, weighs more than three tons and has a 3200 MP sensor. It will be operational, if all goes well, in January 2023. And it will be an inexhaustible source of information.

The the observatory of Vera C. Rubin (in homage to the American astronomer who measured the rotation of stars within a galaxy) is in Chile, in Cerro Pachón, between Atacama and Valparaíso. At more than 2600 m altitude It has two more observatories as companions. His big boost came when in 2008 he received a $30 million donation from Charles Simonyi y Bill Gates.

When construction is finished in January 2023, will house a compact telescope with unprecedented features. It will not be the longest, because they have designed it to be able to move quickly from one end to the other of its total route inside a 40 m high dome. It has three mirrors with an anastigmatic design that prevents aberrations that we all suffer, to a greater or lesser extent, in our cameras: spherical, coma and astigmatism. 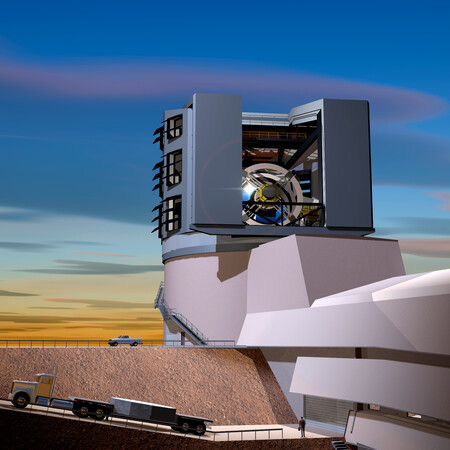 Recreation of how the telescope will be

Its functions will be the following:

The camera will pick up absolutely anything this telescope sees. The project was launched in 2001; the main mirror began to be built in 2007 and the observatory in 2015. The camera is the heart of the system, as it will allow us to collect visible information from the universe that surrounds us.

The digital camera of the Vera C. Rubin observatory

We can’t compare it to anything we know. It is a prodigy of technology that leaves us speechless. Its importance is such that it could change our idea of ​​the universe because we have rarely been able to study it so well.

For now it has three main parts, which have been joined for the first time on May 13, 2022: 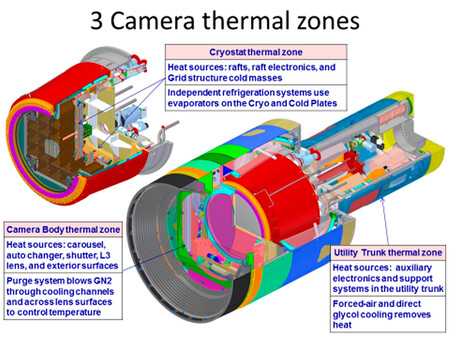 Putting these three unique components together is the last step they took on May 10, 2022. To move them, they had to use four cranes led by three mechanical engineers and two mechanical technicians. Quite a feat given the weight and exclusivity of some components, unique in the world and irreplaceable.

As we can read on the official page of the observatory, practically half of the process is missing:

The team will now work on integrating the power, controls and bleed air systems of the two main assemblies that are now together. They will then place the entire camera assembly back into the camera integration bracket and perform final tests on the camera shutter and filter exchange system. The final step in the integration process will be mounting the L1-L2 lens assembly to the front of the camera. This will mark the completion of the integration process, but the beginning of a full set of verification testing activities to ensure the entire camera is working as required.

When finished, it will measure 1.65x3m and will reach 2,800kg weight, which can measure a small SUV. You will be able to record, thanks to the use of 75 cm diameter filters, wavelengths from ultraviolet to infrared. 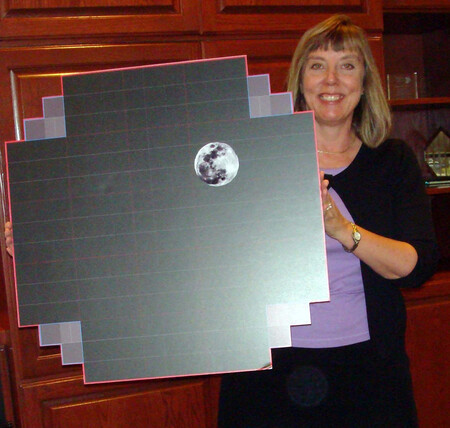 A prototype of the sensor

The sensor CCD have a 64 cm diameter with 189 sensors measuring 4096×4097 pixels mounted on 21 independent platforms. To give us an idea, each CCD can capture eight megapixels of data per second, for a total of 3.2 gigapixels every two seconds.

Those of us who like ‘photographic junk’ are struck by the amount of data that this huge camera can generate with one of the most powerful telephoto lenses we can dream of, with a brightness f1.2. According to the calculations they have made, the information it will generate every night will be 20 TB. We are talking about 200,000 photographs every night and more than 5.2 million exposures in ten years.

Despite that huge amount of data, the camera’s software and hardware will allow the team to be working from dawn to dusk with a minimal maintenance. From what can be guessed, they expect that he will not stop working in ten years.

We can only wait and enjoy all the images that this unique camera in the world will record every night.

Don't miss out: take advantage of the Xbox Series X stock on Amazon and launch the console tomorrow

How to find the cheapest gas station in Spain, easier than ever thanks to this map