Europe inaugurates the third most powerful supercomputer in the world: it has a performance of 151.90 petaFLOPS

The European High Performance Computing Consortium (EuroHPC) has just inaugurated a pre-exascale computing system. This is Lumi, a supercomputer that currently offers 151,90 petaFLOPS performance, which gives it third place in the TOP500 of the most powerful supercomputers in the world.

With this milestone, the Summit (200 petaFLOPS) has been moved to fourth place on the list. Now the podium is headed by the new American Frontier exascale system (1.1 exaFLOPS) followed by the Japanese pre-exascale supercomputer Fugaku (442.01 petaFLOPS).

But this is only Lumi’s first step. Over the next few weeks it will increase its power to 375 petaFLOPS, and by the end of the year it will reach its planned maximum performance: 550 petaFLOPS. By then, if all goes well, it will overtake the Japanese system and take second place in the world.

The most powerful supercomputer in Europe

EuroHPC ensures that Lumi is currently the most powerful supercomputer on the continent—it will retain that place once it reaches peak performance. This is possible thanks to its ambitious hardware configuration.

Lumi has been built by Hewlett Packard Enterprise (HPE) in the IT Center for Science in Kajaani, In finland. The system is based on the Cray EX architecture that is combined with 3rd Generation AMD EPYC “Trento” CPUs alongside AMD MI250X accelerators and Sligshot-11 interconnects. This will allow you to hit that 550 petaFLOPS of power.

As an example, if we wanted to replicate the computing power of the Lumi supercomputer with consumer-friendly devices, “we would need 1.5 million next-generation laptops.” And these would not fit in a room, but would form a tower more than 23 km high.

The entire system will be complemented with a storage capacity of 17 petabytes. In addition, Lumi will run on 100% hydroelectric power and will have a advanced cooling system that will allow to take advantage of part of the heat to heat some buildings in the area.

What is so much power for? In practice, the computing power can be used by researchers to carry out studies in short periods of time and analyze models with large data sets. In other words, supercomputers are a very important tool for research.

Lumi’s computing resources will be made available to researchers across Europe to accelerate scientific advances in fields such as climate change, medicine, artificial intelligence and quantum computing. In addition, about 20% of its capacity will be reserved for the use of small and medium-sized companies. 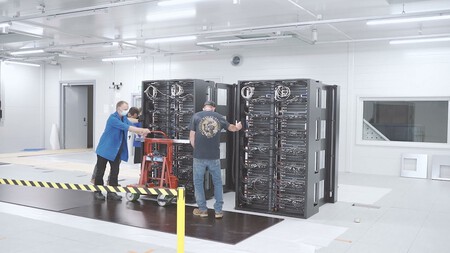 Lumi, a “friend” of quantum supercomputers

Over the years we have explained in Xataka the advances and challenges of quantum computing. The truth is that this does not replace traditional computing, but rather complements it. A clear example of this is that, as we mentioned above, Lumi will be an important tool for quantum computing.

Scientists explain that “quantum computers need supercomputers by their side to take advantage of their ability to hit the right targets in research processes.” In this sense, they have managed to connect this “traditional” supercomputer together with the Finnish quantum systems QAL 9000 (not to be confused with HAL 9000 from ‘2001: A Space Odyssey’) and Helmi.

In Xataka | Meta says it will have the world’s most powerful AI supercomputer by mid-2022: 5 exaFLOPS to power the metaverse

The sales arrive at MediaMarkt: discounts of up to 600 euros on smart TVs from Samsung, LG, Sony or Xiaomi

The sales arrive at MediaMarkt: discounts of up to 600 euros on smart TVs from Samsung, LG, Sony or Xiaomi

Netflix: all the premieres of movies and series in June 2022

Free Movistar Plus+ Lite: all the ways to have it