We knew this heat wave was going to be tough, but we didn’t expect it to be this bad

No, what is happening is not normal. With most of the country installed above forty degrees and nights that are a true tropical horror, we are not only facing the earliest heat wave recorded to date, but the atmospheric anomaly that has dyed the peninsula red is way of churning all records.

How long will the heat wave last? Putting it bluntly, this heat wave is giving weather models more trouble than expected. A few days ago we thought that last Friday would be the peak of the wave, but now everything seems to indicate that it is going to go until Wednesday. And only Galicia, the Cantabrian coast, the Pyrenees, the Canary Islands and, moderately, Ceuta and Melilla seem to be spared.

As of Thursday, the models indicate that temperatures will begin to drop in the west of the peninsula: an Atlantic storm located to the west of the Peninsula will begin to move east. That will push the warm air, replace it with cold air in height and end, if all goes well, with this episode of heat wave.

How ‘normal’ is it to have these temperatures in June? However, all this is a symptom of something worse. If we remember the last years, surely we do not understand very well what is the reason for the alarm. We come from very hot springs. Moreover, since 1975, Spain has suffered ten heat waves In the month of June. That is to say, it is not something excessively rare to suffer this type of phenomenon during this month.

But if we look at the data closely, we can verify that it is a statistical artifact. The truth is that between 2011 and 2022, we have suffered 6 of the 10 June heat waves that we have suffered since 1975. That means that we have seen more waves of this type in the last decade than in the previous 35 years. In other words, these temperatures are “normal” only if we are talking about a “new normal” as a result of the sustained increase in temperatures. 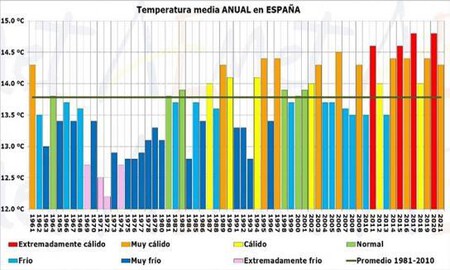 What we can expect from the summer. It is important to remember that, by itself, this heat wave does not tell us anything about how hot the summer is going to be. That is, there is no direct relationship. However, the situation looks bad. As recognized by AEMET itself“The seasonal predictions for this quarter of June, July and August are that, with a very high probability, we are going to have a very warm quarter, warmer than normal.”

around 50 degrees. And this has consequences. Rubén del Campo, spokesman for the State Meteorological Agency, pointed that “if these years we have seen 47 ºC, who can tell us that in a warm peak this decade or the next we will not be able to reach those 50 degrees?”. This question is even clearer if we look at the last report on the state of the climate in Spain.

It is not just that the temperature in Spain has risen 1.7 degrees. It is that, since 1951, we have experienced 146 daily records of high temperatures; on the contrary, we have experienced only 14 records of cold temperatures. Montoro reached the temperature record in Spain in 2021 with 47.4 degrees, yes. And this is curious because, although on January 12, 2021 it registered temperatures of -26 degrees in the moors in the center of the plateau and that may seem like a lot to us, we can make a fairly long list of the coldest January 12 since the 70s. Spain it’s heating up and we’re not ready. Neither technically nor psychologically.

There is something that ‘Star Wars’ has been doing well for a long time. And ‘The Lord of the Rings’ should learn from it