On that occasion, it was reported that, supposedly, shipments of electrical appliances were arriving from Russia that, due to international sanctions, will not be able to be sold there and therefore are being distributed to other territories to be sold at a price of 1.95 euros in the case of televisions.

“Samsung withdraws 4K Qled TVs from its warehouses in Russia and donates them to LIDL in Spain. Now they are at a price of 1.95 euros.

Obviously, it would be necessary to be with the fly behind the ear from the moment in which surely that 1.95 would not even cover the shipping costs per unit from Russia to Spain. But later we saw that, in fact, it was a scam that first took you to a fake raffle website and later, when you were supposedly lucky, it stole your card details while you tried to make said payment of 1.95 euros .

The scams of kitchen robots for 2 euros

Again, the scammers used some real-world context to make their scam attempt more legitimate. Last year, the Mercantile Court 5 of Barcelona condemned Lidl for marketing a kitchen robot called Monsieur Cousine Connect, from the Silvercrest brandwhich it had been selling since June 2018, considering that it infringed the patent rights of the Thermomix machine and forced it to compensate the creator of the machine and withdraw all its kitchen robots from the market (Lidl later appealed the sentence and won). 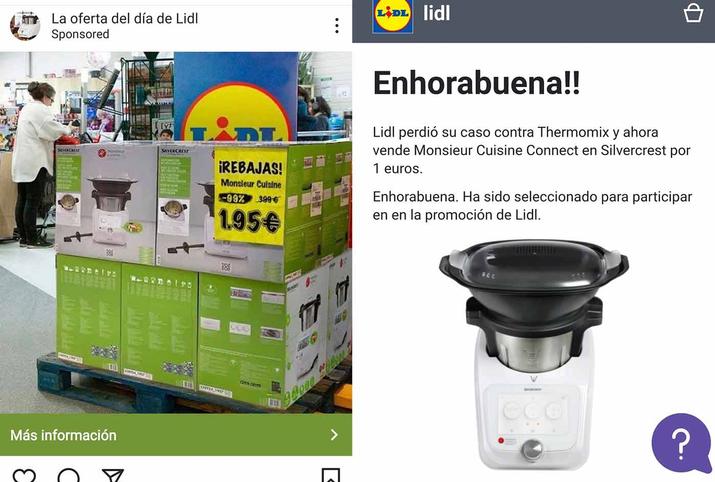 Those supposed products that were withdrawn from sale they were what were supposedly said to be liquidated at a price of 2 euros or 1.95 according to the publication. Obviously, it was possible to think that, if they were withdrawn from sale, they could not be sold, but many people took the bait to get such a kitchen robot at a bargain price. Again, it was a hoax, a scam that subscribed you to a service that charges you 66 euros per month.

Other variants of this scam, such as reported by the Internet Safety Office, also supplanted Lidl to offer their customers a food processor for loyalty points. As in the example of the televisions, when they ended up trying to pay the 2 euros, an error appeared, but they had already kept your personal payment information.

Summarizing all the scam attempts would be infinite, since they multiply every day on the network. To name a few, also Lidl gave away Dyson V11 vacuum cleanersas published Newtral. It also took you to a similar web page where you accepted a subscription to an unknown service for 66 euros per month. In this case it was even easier to catch them, because the supermarket does not even sell that brand.

MediaMarkt and Amazon were also subjected to identity theft for scam with electric scooters in alleged offer, too reported and verified by Newtral. In the case of the false advertisement of MediaMarkt, the deception indicates that the Xiaomi scooter is offered at 1.99 euros for the autumn sales, while the advertisements that impersonate the identity of Amazon indicate that it is a “generous offer for consumers”. Spaniards» with Ninebot scooters at 2.99 euros.

Sony is still making MP3 players: they are for audiophiles and their latest model costs $3,700