China adds a new jewel to its fleet. Huangpu Wenchong Shipyards have completed the construction of the Zhu Hai Yuna ship that its own creators qualify as “The world’s first unmanned intelligent mothership.” Said like this, it may not say much, but Zhu Hai Yun is a peculiar ship for two main reasons: it has been created to transport more than fifty drones and autonomous marine vehicles and it incorporates an AI system that allows it to travel without crew on boardcommanded remotely or even independently in the open sea.

The Zhu Hai Yun now faces its final tests with the aim of being completely ready before 2023. Once it enters service, it can be used for both research and military purposes. “From a purely scientific point of view, which is the perspective that China is promoting, we could see Chinese drones, both surface and underwater and launched from the Zhu Hai Yun, contributing to disaster mitigation or environmental monitoring” , señala Matthew Funaioledel Center for Strategic and International Studies, a Business Insider.

Another possibility is that it is the Chinese army that finally takes advantage of it for intelligence missions in the South China Sea. “Technology, especially information gathering systems, often have dual use applications. Data collected from autonomous systems could help with surveillance, awareness, help submarines of the People’s Liberation Armyenhance China’s submarine warfare capabilities…”, enumerate. 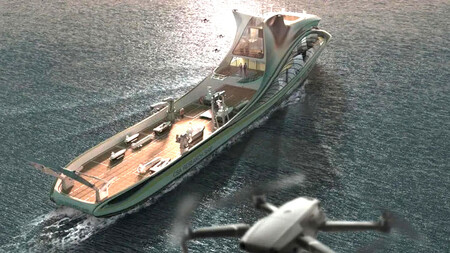 Beyond the use or uses that Beijing plans to give it, the Zhu Hai Yun is a unique ship due to its surprising characteristics. On board she carries more than 50 aerial and marine drones, both for surface and underwater navigation. In the case of the former, the ship has a wide deck from which they can take off and land. The ship has a total length of 88.5 meters, a beam of 14 and a draft of 6.1. She is capable of reaching a speed of 18 knots.

The ship can operate without a crew, with remote control or even autonomous navigation in the open sea. It also incorporates the IMOOS system (Intelligent Mobile Ocean Stereo Observing System), developed by the South Guangdong Marine Science and Engineering Laboratory, can be used to mitigate marine disasters, monitor the environment, and collect information.

“The ship is a new ‘marine species’ that will bring revolutionary changes to ocean observation,” he told Science and Technology Daily Chen Dake, director of the Asian laboratory.

Zhu Hai Yun, which belongs to the Zhuhai Canton South Marine Science and Engineering Laboratory, from which it takes its name, is by no means the first autonomous ship. This same year the Suzaku, another cargo ship with the same peculiarity, managed to complete the first commercial and autonomous voyage. Her AI system allowed her to travel 790 kilometers with a load of approximately 749 tons and without the need for humans in 99% of her voyage.

The best series with short episodes of 15 minutes

Movistar Plus + recovers a channel and passes another to high definition