the premiere of ‘Jurassic World: Dominion’ brings back the inevitable comparisons with Steven Spielberg’s original film of 1993. And it cannot be said that this new sequel shies away from those parallels: it has called a good part of the original cast to join the two previous installments of ‘Jurassic World’ and close this trilogy of sequels with a flourish.

However, and like the other two sequels (and like the two direct from the original film), ‘Jurassic World: Dominion’ does not take off. It is too attentive to nostalgia and forgets to bring its own news. We are going to review in 7 points why and how the sequels of a film fail that, despite the time that has elapsed, is far from equal.

1-It is impossible to replicate the original impact

As Spielberg did with ‘Jaws’ at the beginning of his career, with Indiana Jones shortly after or, leaving the director’s filmography, as has happened to classic directors at very specific moments of his career (from Cameron in ‘Terminator 2’ to George Lucas in the first ‘Star Wars’), some of his greatest successes are the result of the quality of his films, but also the fortune of being in the right place at the right time. Many of these directors have had comparable and even greater successes, but the iconicity of its main successes is also due to the moment in which they were released.

In the case of Jurassic Park, it is largely due to the absolute realism of the dinosaurs, which arrived at a time when special effects took a very specific leap that allowed the combination of classic tricks and CGI to give rise to impressive monsters and never seen before. ‘Jurassic Park’ came at the right time when technology allowed the entire world to be impressed with spectacular monsters.

2-Su high concept has not been matched

Namely, an idea that by itself sells the script. What in ‘Jurassic Park’ is: an amusement park with dinosaurs. For many turns that the sequels have given to that idea or have tried to leave it behind, none have been able to come up with another concept as powerful. Neither in ‘Dominion’, where dinosaurs roam free, nor in ‘The Fallen Kingdom’, where genetic issues continue to be turned around and ideas such as smuggling with dinosaurs are introduced. Quite simply, the concept of the former is overwhelmingly powerful.

3-It’s not about the quality of the CGI, but about how you use it

Something you hear many times about ‘Jurassic Park’ is that it’s amazing that such an old film has better digital effects than current installments or, in general, than modern films. This is not entirely true: on the one hand, it is true that a greater amount of time was spent on film than is spent on digital effects today. But in addition, it is that they are raised in a superb way.

On the one hand, as we said above, mixing practical effects with dinosaur animatronics and CGI shots, but on the other hand, planning the sequences like a conventional movie. In other words, scenes like the one with the T-Rex attacking the cars do not plan their montage or their shots at the expense of effects, but rather like a conventional movie to which CGI is then added. It’s the only way to get unforgettable shots like the T-Rex’s triumphant roar at the end of the movie.: first the shot is conceptualized and then executed and not the other way around, as often happens with current films.

4-There are no authors behind the sequels

With the permission of Joe Johnston, Colin Trevorrow and JA Bayona (and Spielberg himself in the first sequel), the exact thing would be to say that there are no authors as relevant and wise as Spielberg was in the original film. The second half of Bayona’s film, for example, introduces elements typical of the director’s cinema, such as the clash with gothic horror, but it doesn’t work in a film that concludes its first half with a raging volcano climax.

Spielberg, for his part, manages to find a very special balance in the first film between a studio blockbuster and an auteur film. Many elements of her cinema are in her, but above all there is something unmistakably Spielbergian: the ability to bring back the vision of the director and the spectator to the fascinated gaze of a child with the spectacle of giant lizards. No subsequent director has managed to match the innocence of that gaze.

5-Nostalgia is not this

‘Jurassic World: Dominion’ is one of the recent films to make more artificial use of the nostalgic element. It feels compelled to incorporate the three characters from the first installment, but keeps them away from the protagonists of the previous two ‘Jurassic World’. And when they do meet, the group is too big, they haven’t developed relationships with each other… and they have to start kicking off subplots when the viewer is simply exhausted. In addition, ‘Dominion’ is punctuated by hints that don’t make much sense, like the ridiculous encounter between Sam Neill and the scientist from ‘Jurassic Park’, whom he seems to remember.

The good use of nostalgia as an ingredient in movies has to be more organic, a more intangible element. than a list of components that are crossed off a list, like a cooking recipe. ‘Jurassic World: Dominion’, in that sense, is quite robotic, in addition to having an extra problem: the nostalgic elements are so charismatic and interesting that they practically devour the rest of the film. Every minute of Jeff Goldblum is considerably longer than half an hour with Chris Pratt, and that ends up working against the whole. 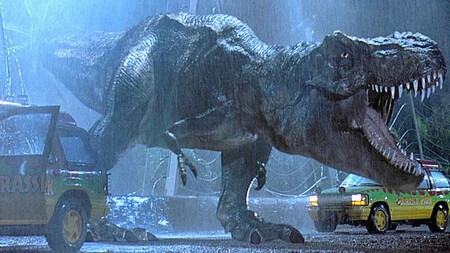 6-The exhibitionism of dinosaurs is a bad idea

At this point, we shouldn’t be insisting on these things, but teaching monsters too much is not a good idea in films with the characteristics of this franchise. Spielberg, again, did it perfectly, combining the wonder of discovery (the famous diplodocus moment) with progressive revelation to ease the tension (in both the T-Rex and velociraptor cases, it took us a long time to see them in all its glory).

Of course, the sequels are based on the loss of the element of surprise, but when they keep it, they either manage it fatally (the rather simple idea of ​​mutated dinosaurs as genetic experiments) or, simply, they are ridiculous (the whole story of friendship between Chris Pratt and Blue is so crazy that Jeff Goldblum himself can’t resist making a joke about it in ‘Dominion’). Again, we start from a very difficult situation to overcome and a dead end for the sequelsbut they don’t try too hard with that either…

7-There has been no film that overshadows him, and that weighs too much

And finally: the sequels are fighting against the impossible: decades later, the public is clear that ‘Jurassic Park’ cannot be overshadowed. Each new movie, rather than a new contender to combat that idea, is a nail in the coffin for its successors. Each new ‘Jurassic World’ does not make us think “it almost makes us forget the first one”, but it reaffirms us in the idea of ​​”nothing is going to make us forget the first one”.

And of course, the myth of the first film grows and grows. How many people left the last ‘Jurassic World’ wanting to review Spielberg’s first installment? It is not, perhaps, the best thing that can be said of a sequel…

A Google engineer has chatted about life and death with a chatbot. He now he is convinced that he has a conscience

Manufacturers, we want dual chargers with every laptop