A Burrhus Frederick Skinner, philosopher and behavioral psychologist from the United States, the “Eureka moment” came to him as it did to the distracted sages in the purest Archimedean style: while he was gawking at the sky. To be more precious, him while he watched the birds fly.

It was the early 1940s, the winds of World War II were rising, and Skinner and much of the rest of the US were pondering how to improve the aim of the missiles with which it attacked Axis targets. They had good planes and bombs, but once they dropped them… From then on their success depended on a mix of luck and aim.

Skinner was pondering this problem when he looked up to see a flock of birds flying in formation, perfectly coordinated, as if they were being guided from some distant base. “Suddenly I saw them as ‘devices’ with excellent vision and extraordinary maneuverability,” I would remember later: “Couldn’t they guide a missile?

— “Was the answer to the problem waiting for me in my own backyard?” she wondered.

He was convinced that it was, so he decided to take advantage of his great tool, behavioral psychology and the pavlovian conditioning. Perhaps the Allies did not have kamikaze pilots willing to crash into enemy targets and risk their lives in the mission, but… What if they could use birds trained to assume that role and guide missiles towards the Nazi ships?

It sounded crazy, but BF Skinner had used pigeons before in his research and knew that with good training and the help of stimuli they were capable of pressing levers. Why not “pilot” missiles, then? Taking advantage of animals for suicide missions was also not a problem in times of war. In the USSR, for example, they used explosive laden dogs to burst the German tanks in their advance towards Moscow.

So sure was he that it could work that Skinner knocked on the door of the National Defense Research Committee and presented his proposal. There, the pigeons and the bombs sounded almost like science fiction, but the country was at war and, you know, desperate problems, desperate solutions. The committee decided to try his luck and he gave $25,000 so that it was pulling.

The codename of the program: Project Pigeon. Clear and descriptive, yes, but surely as indecipherable to the Axis powers as the best of ciphers.

Skinner’s idea was relatively simple, at least on paper. He trained a group of pigeons—chosen for their qualities, including their great eyesight—to recognize a specific pattern and peck on sight. The animals knew that if they acted like this they would receive food, with which they were conditioned. As required History WiredSkinner managed to get a trained bird to peck an image more than 10,000 times in 45 minutes.

So far so good, but… what good is that when it comes to guide glider bombs? 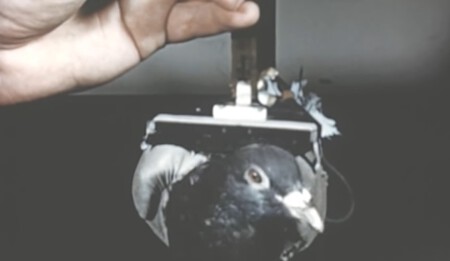 Skinner’s proposal was to use that frantic pecking to guide the explosives. His team made a cone-shaped device with three compartments, each one for a pigeon that was traveling inside securely fastened. The contraption included several sensors and lenses that showed the animal the target towards which it should direct the bomb. Conditioned by Skinner, when the pigeons saw the pattern with which they had been trained —a Nazi navy ship, for example—devoted themselves to pecking. Those movements were what helped direct the bomb towards its enemy.

“Using trained pigeons and hydraulic guidance, Skinner and his team developed a method to create the first smart pump that could guide you to your goal with great precision to save innocent lives. In those days, there were no guided missiles. When a bomber dropped a bomb from an aircraft, he could only hope that it would hit its target.” explain from the University of Arkansas beside an image gallery of the peculiar device.

In Smithsonian Magazine He specifies that one of the keys to the prototype was a system of cables attached to the pigeons’ heads and that helped direct the bomb with precision. “When the three pigeons were pecking, it was believed that you could point in one direction,” she tells the magazine Peggy Kidwell, of the Medicine and Science section of the American History Museum.

BF Skinner’s plan was ingenious and achieved some successful demonstration—even we keep videos in which we can see the pigeons pecking on the vague silhouettes of ships – but the authorities ended up losing interest: their funds were destined for other projects. 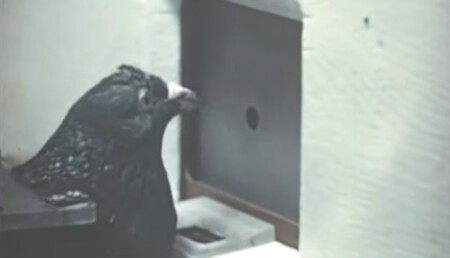 Kamikaze pigeons would still have another chance in United States. After the Second World War, in 1948, the authorities reopened the project, renaming it Project Orcon —of “organic control”— and left him in charge of the Naval Research Laboratory.

“Tests repeatedly showed that pigeons could successfully guide the missiles to a target under ideal conditions, although clouds, waves and shadows could cause them to drift off course,” explica William Wolf in his essay Off Target: America’s Guided Bombs, Missiles and Drones 1917-1950.

No luck then either. In 1953 the authorities decided to cancel the program. Electronic missile guidance systems gave promising results and were considered a more interesting option than those old warheads piloted by pigeons along the way. ‘Chicken Run’.

We still have the idea, impressive images… and a new concept of the pigeons.

Spot, the robot dog of Boston Dynamics, has competition: this is the robot goat of Kawasaki

The “super cookie” TrustPid is already active in Spain for Movistar and Orange users. We explain how to disable it

The "super cookie" TrustPid is already active in Spain for Movistar and Orange users. We explain how to disable it

Pure fun: the most insane disaster movie in recent years has arrived on HBO Max

BLUETTI EP500Pro, a portable solar UPS for all your household appliances