Vodafone gives away gigabytes again: so you can get 20GB for free

Summer is a favorable time for the different operators to launch a series of promotions and give some kind of gift to their customers so that they can enjoy their holidays in better conditions. Vodafone has now been the one who will allow some of its customers to get an extra 20 GB of mobile data at no additional cost, which is also added to the current summer promotion.

The promotion is valid for those prepaid customers of a series of tariffs. This gift will be unique and will not affect the summer promotion or any other applied promotion, so it will be cumulative.

As we said, this time it is the recharge segment that benefits from a promotion. Vodafone is taking good care of this segment despite the fact that its number of customers is quite small compared to the contract one.

For this promotion, prepaid rates will be valid Vodafone Prepago S, S Voz, M, L, XL, XXL, Big yuser y Heavy yuser. New clients of any of these rates will receive a 20 GB gift once and after the renewal of benefits in the first 30 days after registration. 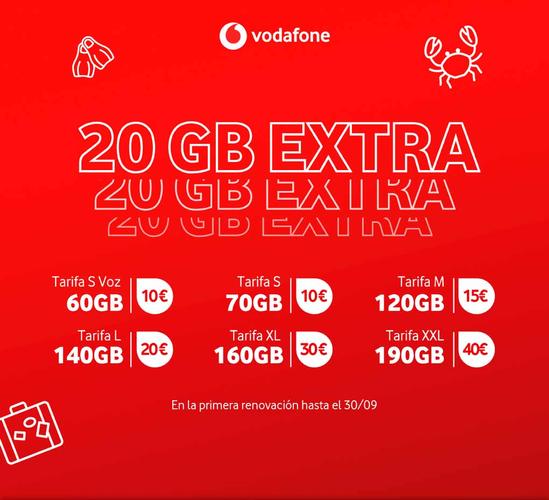 These free 20 GB will have a Valid for 28 days from activation. The consumption of these will be prioritized before those that you have in your rate, so that only once they are spent will your usual ones begin to be used. If the customer has a Vodafone Pass bonus, the traffic included in the Vodafone Pass will not be deducted from the 20 GB gift. This promotion will be valid until September 30, 2022 included.

Cumulative to the summer promotion

As we have pointed out, this gift is independent of the summer promotion that has been applied since May 23 and will also last until September 30, 2022. In this, the gigabytes of each most basic rate are doubled and 20 GB are added in those with the highest amount of mobile data.

This extra mobile data will be available each time the rate is recharged (in Vodafone it is every 28 days), so you will not have to save it from one recharge to another. In fact, the gigabytes not consumed are accumulated for up to three months, so you can save some recharging in between. Combining both promotions, you will be able to enjoy a good haul of gigabytes during this holiday season.

The Black Shark 5 and 5 Pro arrive in Spain: official price and availability of these two bestial gaming mobiles

Hunting Bargains in computing and gaming: the PS5 controller at a minimum price, the beastly 34" Huawei monitor at only 372 euros and more

Sorry, you do not have a fortune of thousands of euros in the drawer in the form of old pesetas