Spot, the robot dog of Boston Dynamics, has competition: this is the robot goat of Kawasaki

For years, Japan has been considered one of the most advanced countries in the field of robotics. The Japanese have created everything from the skillful ASIMO to huge mechanical automatons like a 20-meter Gundam. Now they have surprised with a robot goat which reminds us of Spot, the “dog” of Boston Dynamics.

According to Kawasaki, the company behind this project, the idea of ​​developing this quadruped was born from the need to have an alternative that would combine the best of robots that have “legs” and those that have wheels. The result? bex, a four-legged hybrid robot that can move freely on different types of surfaces.

Many robots are inspired by animals, to try to emulate their adaptation to the environment and thus be more versatile, but Bex is quite striking. His design has been inspired by a Capra Ibexa species of wild goat native to some mountainous regions of Africa and Eurasia.

The designers have taken their work so seriously that, in addition to giving it a white look, they have not forgotten to add horns to its head. Of course, these are totally optional. The future owners of Bex, in the event that one day it goes on the market, will be able to remove the horns or replace the head with that of another animal.

As we can see in the video, Bex’s hybrid system allows you to move quickly on wheels on even terrain. In case there are obstacles along the way, you can activate its legs to move forward. All this with the capacity to transport people or other types of cargo with a maximum weight of 100 kilos. 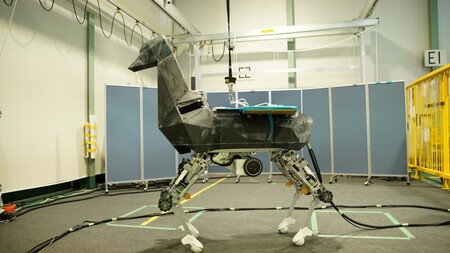 The company thinks that this robot could be useful on construction sites, to move payload from one place to another. They also imagine him helping the people who work in cultivation tasks, or as factory safety inspectorwhere you’ll be able to check the status of measuring instruments and send images to a remote location—oddly enough, a job identical to what Boston Dynamics’ robot dog already does.

For now, Kawasaki says it will continue to develop this robot and others under its Kelido project, derived from its Rugged Humanoid Platform. There is no date for the possible arrival of this new robotic friend, but if things go well, in the future we could see him working.

In Xataka | Someone has created the smallest robot in the world: it is shaped like a crab and can walk and jump