I have been working as a photographer for many years, and One of the things I enjoy the most is taking landscape photographs.. I love getting lost in the mountains and finding the light that I like. My way of working is very simple, without all the contributions of modern times. Let’s see them.

There are many to understand photography. We have window photographers or mirror photographers. Those who look out on the world and those who reflect their way of thinking. In landscape photography, we find the followers of Ansel Adams and those of us who prefer the look of Robert Frankless precious.

Everyone has to choose their place with the camera. I have bet on Robert Frank. So my photography is not spectacular at all. The only excess I allow myself is the tripod. I don’t want to depend on apps, or get up early for one image, or go without sleep for another.

I prefer to photograph as I breathe, as I move day by day. For this reason I always go with a camera, with a simple and light lens. And nothing more. If I don’t take any shots that day, nothing will happen. For this reason I do not usually take spectacular photographs, with several rows, in HDR and with more hours on the computer than in nature.

This time I am going to show five of my favorite photographs as a possible source of inspiration. I don’t want it to be like a cookbook. It is impossible to achieve the same result as another photographer. You have to look at the keys of composition and technique. And if you don’t like them, you’ll know how not to do them.

The idea is to show another way of looking at the landscape, outside the classic ideas of composition, digital treatment and others. It is one more way to take pictures in the places that we like, without the need to have a state-of-the-art equipment and master all the applications on the market. 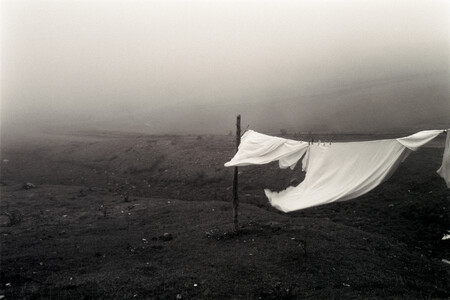 I always travel accompanied. With family, friends or students. Except on rare occasions, I don’t like to go out alone to take pictures. It’s a tremendous flaw for a photographer, one of the loneliest professions. In this case we wanted to climb to the top of a mountain where there was a shelter. And the fog caught us.

With fog I have one of my favorite lights. So I loaded my little Minox 35 with TMax 400 black and white film. I liked the grain it gave and the contrast, a constant in my style. That camera has a Minotar f/2.8 35mm which has become my preferred landscape lens. nothing to do with him 14 mm that now dominates in the specialized world.

In the fog everything changes fastso you have to be very careful. When I got to the top I found those sheets blowing in the wind. I placed the pole in the center and the sheets to the right to break the symmetry. And feel free to shoot at f8 to get a good depth of field. The shutter time was very slow, but it gave the fabrics a movement that brings the image to life.

The negative is digitized instead of scanning. It is one of the fastest and most efficient techniques to take advantage of the full potential of our oldest material.

This is proof that a good photograph can come out at any time. I saw this pine forest every day first thing in the morning before flying. And every day was totally different. It is made with another compact, this time a Canon PowerShot G9. It is an irrelevant but necessary fact to try to justify the limitations of the original.

One day I decided to leave home early. I couldn’t take the tripod because I didn’t want to lose too much time and I wanted to find a place in the forest where the first rays of the morning sun would be seen. And mark the broken verticality of the trees in the composition.

Since there was very little light and I wanted to use the lower ISO, I opened the aperture to f5.6 and shot a burst at 1/40. The second shot was this, the sharpest. At the time of developing the photograph I opted for a warmer light and reinforce that loss of contrast as the view moves away. 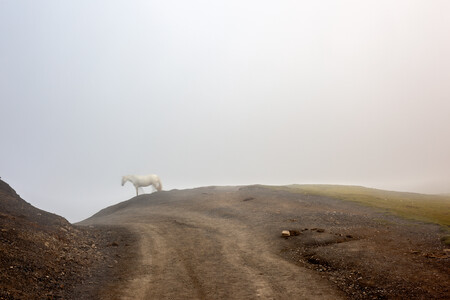 One of my favorite photographs. The weather was terrible (did I say I love bad weather?) and we had barely reached the last cable car of Fuente Dé. Upstairs there was no one and we had a short walk to one of the shelters that are up there above Picos de Europa.

It was my daughter’s first time in the high mountains, so I carried her in my backpack. Since nothing could be seen, she fell asleep. And suddenly the mist parted and the road appeared. A white horse began to cross in front of us. I took out the tripod, I mounted the camera and closed the diaphragm to f11. Shutter time was only 1/8. The composition, based on simple lines based on the curve: the path and the two lines of the mountain.

I knew that the horse was going to leave moved. So I shot one, two, three and four times while moving forward in the chosen shot. The last shot, before it disappeared, was the best. Why? Suddenly it came to my mind, during the edition, the painting by Goya ‘Half-sunken dog’. That’s the reference he was looking for on that cold July day. And she continued to sleep.

Madrid from the air

Madrid from the air

I went aerial photographer for a long time. I have thousands of hours of helicopter flight. And this photograph is one of those times. Madrid was to my left and the four towers were still being built. Of course, I only took photos if the clouds appeared.

This type of photography is very complicated. You have to shoot with high speeds to compensate for the movement of the helicopter. You can go tied with the door open, but it’s not something I always wanted to do. This time the door was closed and the small window was open.

I really like the panoramic format to give that feeling of spaciousness even if you are using a long focal length, like the 70mm I used back then. The composition is simple and reinforces the horizontality. If you look closely, everything is based on bands of light.

This time we were in a static, still in the air. So I was able to close the diaphragm of my Canon EOS 5D Mark II at f5.6 and shoot at 1/640. In those times the stabilized targets they were very basic and you couldn’t trust them blindly. As always, several shots to ensure a clear one. 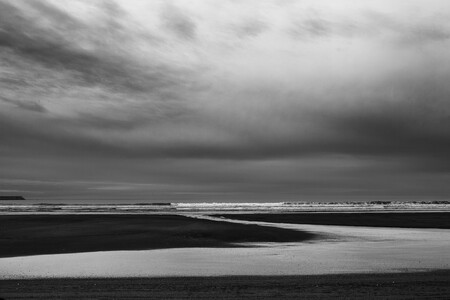 Maritime images are recently related to a composition in triangle, where we find an element in the foreground and two in the background to direct the gaze. In addition, the exposure must always be very long to achieve the fog effect.

Here I did the opposite. On a beach where you see the dinosaur footprints I planted the tripod right on the tongue of water that had formed. That S-curve directs the viewer’s gaze to the sea. And the overcast sky, along with the black sand, make a perfect setting.

One of the secrets of this photography is the development in black and white. If you look closely, you can see all shades of gray, from black to white. To achieve this I used a personal process based on luminosity masks. Without the light of that tongue of the sea, photography would not communicate anything.

Photography is a perfect job (and hobby) because you can teach others how you see, just as writing teaches how you think. If you don’t have time, you have a thousand ways to get inspired to achieve a good result. But if you can dedicate hours to it, in the end you achieve what you are looking for.

Closed window or open window: the best method to protect us against the heat according to science

Spotify conquered music first and then podcasts: now it has decided to go for audiobooks

Spotify conquered music first and then podcasts: now it has decided to go for audiobooks

These are the best emergency apps for Android phones