Few gaming and content creation laptops have the ability to give us the feeling of trying something new. Something different. ASUS ROG Zephyrus Duo 15 does. We thoroughly analyzed it two years ago, and we loved its overall performance. However, what we fell in love with was the experience that its two screens offered us and the impact that they proved to have on our productivity.

The new ROG Zephyrus Duo 16 to which we are going to dedicate this article takes up the witness of that laptop that we liked so much in 2020, and it does so by updating all the components that two years later it is necessary to update and refining those sections that had room for improvement. We have tried it, and, as you are about to discover, our feelings during this first contact are very positive.

In any case, before we go any further it’s worth pausing for a moment to take a look at the review setup we’ve seen in action. Its processor is an AMD Ryzen 9 6900HX with 8 cores and capable of simultaneously processing a maximum of 16 threads.

Wrapping it up is 32 GB DDR5-4800, an NVIDIA GeForce RTX 3080 Ti graphics processor (the laptop version) and two 2 TB SSDs each with a PCIe 4.0 interface and configured in RAID 0 (striping). There is no doubt that they are top notch specs which, as we will see later, have a very obvious impact on the price of this laptop.

Before delving into the features and experience offered by the second screen, I suggest that we take a look at the main screen of this laptop. It incorporates a 16-inch IPS LCD panel with resolution WQXGA (2560 x 1600 dots) and mini-LED backlight. Its maximum refresh rate is 165 Hz, it has a response time of 3 ms, it is compatible with Dolby Vision content, and, according to ASUS, it is capable of restoring 100% of the color volume of the DCI-P3 space.

As you can see, on paper its characteristics look very good. During this first contact we have not had the opportunity to analyze its image quality in detail, but if I have to stay with what initially caught my attention I would choose without hesitation the richness with which it reproduces the color and the precision with which it that acts the algorithm that is responsible for local backlight dimming. 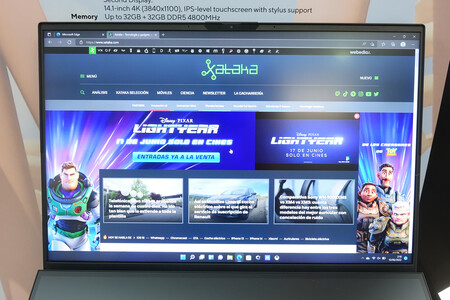 Let’s go with the second screen. Like the main one, it uses an IPS-type LCD panel, although its density of pixels per inch is greater than that of the matrix it complements (it has a resolution of 3840 x 1100 points). These figures clearly reflect the peculiar aspect ratio that this 14-inch secondary screen offers us, which, as we can guess, is tactile. 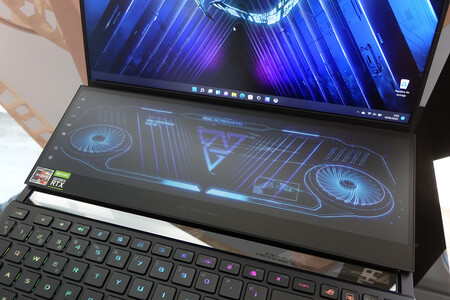 Once we have reached this point, it is natural for us to ask ourselves what this secondary screen is for and what does it bring us. We can use it for many things: to run applications specifically developed to take advantage of it; to keep some background tasks visible; to act on a chat or a tool streaming while running a game on the main screen, etc.

ASUS defines its features in a rather illustrative way: it calls it advanced multitasking. Its possibilities are very wide, but, as is logical, it is necessary for developers to make an effort to get the most out of it. 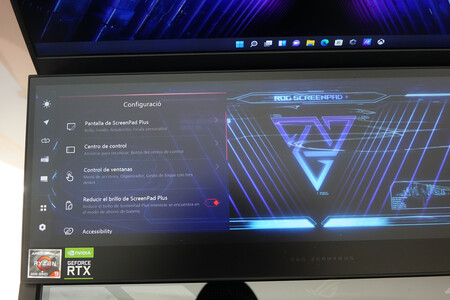 If we stick to its image quality, this second screen is up to the task. I couldn’t test it outdoors, but I got the feeling that its brightness delivery ability isn’t an issue. Also, respond accurately to strokes when used to write or draw on it freehand, and like the main display it reproduces color very convincingly (although probably not as accurately as the main unit). 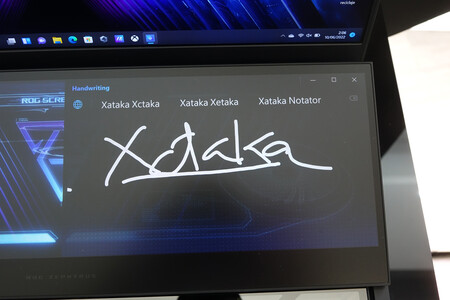 The panel that we can see in the following detail photo has been designed by ASUS engineers to help us customize the behavior of the secondary screen. It’s intuitivebut above all I liked it due to the enormous range of options that it puts in our hands.

In fact, there are so many that it is worth spending some time on them because familiarizing yourself with them will help us get more out of the secondary screen. And there is no doubt that whoever chooses to get this laptop will be determined to take advantage of advanced multitasking that this second screen offers us. Otherwise, it is preferable to opt for a computer from ASUS or another brand with the conventional design that bets on a single screen. 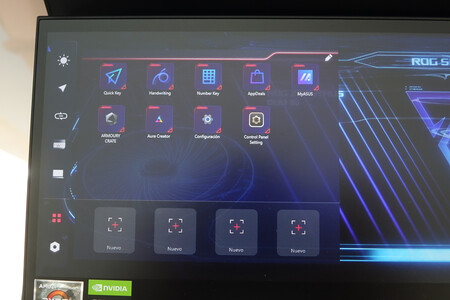 The keyboard and the ‘touchpad’ of this laptop are a delight

In the following photograph we can see that the location of the touchpad of this laptop it is unusual. And it is that instead of being housed just below the keyboard and in the center of the computer, it is placed on the right margin.

It is likely that some users will take some getting used to handling it in this position at first, but after a short period of adaptation everything should go smoothly (It took me just a few minutes to internalize that the touchpad is not housed in its usual location).

To a large extent, the experience that a laptop offers us is conditioned by the quality of its keyboard, and the one that ASUS gives us together with this equipment is of high quality. The touch of the keys is pleasant; your route, correct (1,7 mm); the distance that separates them from each other helps us to minimize failed presses, and, in addition, they hardly suffer from transverse oscillation.

This last quality is important because the absence of oscillation reduces mechanical fatigue on the joints of our hands (especially our wrists). 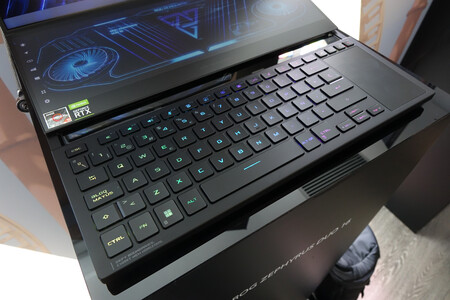 The following detail photograph reveals an interesting feature of the touchpad: at any time we can transform it into a tactile numeric keypad that, now yes, is placed in its traditional location (more or less).

This way of implementing the numeric keypad has a very clear advantage: it allows us to have it when we need it, but, nevertheless, it does not take up space because, in reality, is integrated into the touchpad. Given the limited space available on laptops, I find this solution ingenious and appealing. 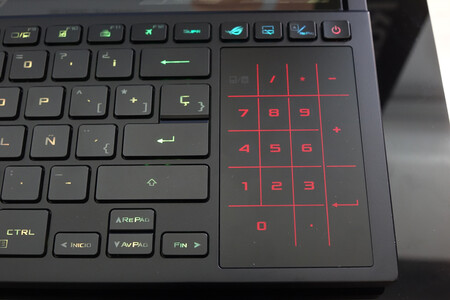 The connectivity of this gaming laptop (yes) is up to scratch

In the following photo we can clearly see the tilt of the secondary screen when we open the laptop. The 13 degrees that it acquires allow us to act on this panel with comfort, but this is not the only reason why ASUS engineers have introduced a mechanism, which, by the way, is very robust, to give this screen this inclination.

And it is that the gap that remains between the secondary screen and the surface of the laptop enclosure when we are using it allows hot air to escape inside the equipment effectively to renew it with air at room temperature from outside.

It seems to me a wise decision, especially if we do not overlook the fact that within this equipment resides a GeForce RTX 3080 Ti graphics processor and a Ryzen 9 CPU (as much as both components are adapted to the characteristics of portable computers). 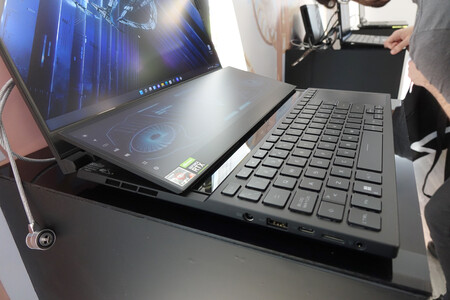 When it comes to connectivity, this team is generous. And it is that it incorporates an HDMI output that implements the 2.1 standard (credit goes to the NVIDIA graphics processor), 2 second-generation USB 3.2 ports and type A, many others with the same characteristics but type C, a Gigabit Ethernet port , a jack of 3.5 mm combined to which we can connect both a headset and a microphone, and, finally, a micro-SD card reader. In this section I have nothing to object. 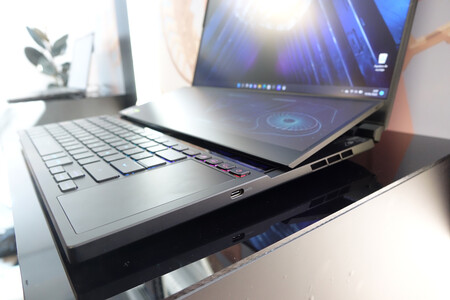 It’s good and pretty, but not cheap

This first contact with this laptop has left a great taste in my mouth. It is robust and impeccably finished, it has very attractive specifications both for creating content and for enjoying any latest game, and, in addition, the second screen can have a profound impact on our experience if we get hold of it and integrate it into our workflow or leisure.

It is a great team, but the 5,000 euros that ASUS asks us for it places it hopelessly out of reach for most users

I hope that we will have the opportunity to thoroughly test it so that we can offer you a more in-depth analysis, but until that time comes, I can only give it a single snag: the 5000 euros that ASUS asks us for it put it hopelessly out of reach for most users. And it’s a shame because it’s a real team. 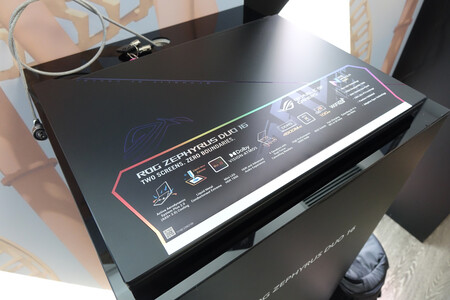