Your car will have hyper-realistic graphics with this new gadget

Volvo’s gadget for a smarter car

Car manufacturers have been talking about the connected car for several years, but there is not always a very clear idea of ​​what tools and utilities will arrive. To reflect what state the connected car is in, we currently come up with new very useful instruments that aim to make these smarter.

It is precisely what we see with manufacturers as advanced as Volvo, who is betting fervently on new additions and the latest technologies of the most surprising. It’s more; if we look at electrified vehicles like the plug-in hybrid XC40 Recharge (here its technical sheet), we will have one of the largest provisions in this field on the market.

As far as this last case is concerned, it is a gadget that we can have in our car (the intention is that other brands can also carry it) a device that will reflect on our vehicle a series of 3D animations and hyper-realistic graphics as a screen. The peculiarity, moreover, is that it will do so with a graphics engine that is the same as that used in popular video games such as Fortnite.

Or what is the same; our car will incorporate a gadget in which the screens will have the same photographic graphics quality offered by the Fortnite game, thanks to the agreement reached with Epic Games to integrate the Unreal Engine game engine into their devices.

The software is from Epic Games, who is one of the world’s leading interactive entertainment companies. And one of its biggest advances is the Unreal Engine, the most powerful real-time 3D creation tool, used in different industries besides video games, and which Volvo Cars is now going to use to develop digital interfaces inside their vehicles and offer graphics in real time. 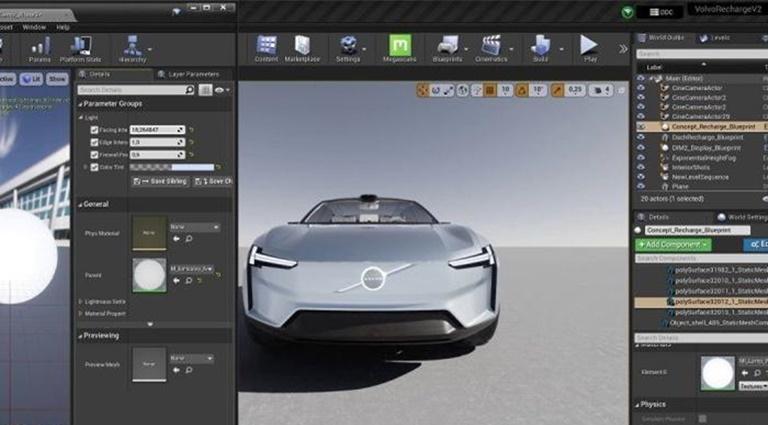 In the latest version, Unreal Engine 5, players can enjoy near-real images. If we apply this to this class of Volvo electrified vehicles, it could allow drivers to be less stressed and have more information at your disposal while driving.

As they say from the manufacturer, this gadget technology for our car provides the ability to create high quality responsive images with which we can work and transmit information, as well as create realistic representations when necessary. And what will it consist of? Well, in representing what the external sensors of the vehicle, such as the camera, the radar and, soon, the LIDIAR, are capturing what is happening outside the vehicle for an easy view of the driver.

It will use a multifunctional operating system

We will thus have a series of 3D animations and high quality graphics making the experience more immersive and pleasant, in which the speed will be provided by the technology of the third generation of Qualcomm’s Snapdragon Cockpit platforms. The system in general will be twice as fast than the current one and the graphics will render ten times faster than now.

It will do it all with a new operating system embedded in the screen that will work as an ‘umbrella system’, capable of integrating all the other systems that operate in the electric vehicle, including Android Auto, Apple Car, Blackberry QNX, Linux and AUTOSAR. The processing power for this system will come from a Nvidia SoC.

The Swedish manufacturer’s intention is to incorporate this type of gadget as instrumentation in its next Embla, Volvo’s SUV-type car that is planned for a launch in 2023, but is not yet confirmed. This will be another 100% electric vehicle from the house, and it is destined to be the flagship with which it will bet on a striking style, with a height that is not excessive and a generous wheelbase to house the battery on the ground and, above all, increase the space on board.

Blink Video Doorbell: Amazon’s wireless doorbell to see who is at the door arrives in Spain

Different time travel for today on HBO Max, in a series that fills the fourth dimension with nuances and originality