5G and great autonomy: this Samsung has never been so cheap

Samsung has been putting a lot of effort into making a dent in the mid-range smartphone market for several years now. To do this, it has one of its main assets in its M series. This year the Korean company has launched a new batch of these phones, where its new Galaxy M33 is possibly the one that offers the best value for money. If you were looking to get him, take advantage now that you can take him with a discount of more than 100 euros.

In a year where Samsung’s most outstanding phone has been the Ultra variant of its S22, this Galaxy M33 is postulated as all a star among mid-range phones. Don’t miss out on this great Amazon deal, which leaves it well below its market price.

The Galaxy M33 arrives with 5G by flag

The design of this Galaxy M33 features a plastic finish that suits you very well. In hand it is tremendously comfortable to hold, thanks mainly to very comfortable rounded edges. The 4-camera module on the back integrates very well, so it looks very natural. the phone is available in three different colors (blue, brown and green), and all three are currently on sale at the same price. Keeps the headphone jack that many new smartphones are already being discarded.

Its screen is large, specifically 6.6 inches. The panel that mounts this Galaxy M33 is an LCD that has Full HD+ resolution and where an update rate of 120 Hz, which is not usually common in terminals with such low cost. The screen has a good enough brightness to play games or watch content in situations where we have a lot of external light, so you will not have problems using it in any case. 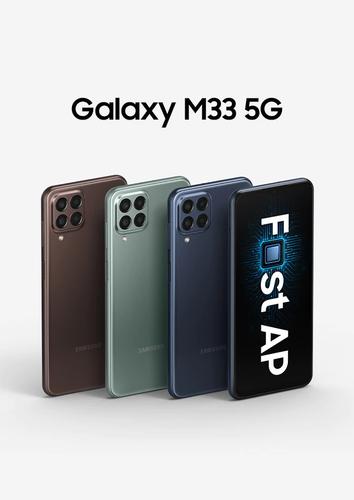 As the product sheet on Amazon indicates, this Galaxy M33 comes with el Snapdragon 750G under the hood, a very good processor with which we will not have any performance problems. This is accompanied by 6 GB of RAM (expandable through Samsung’s virtual RAM system) and 128 GB of storage, in addition to having a MicroSD card slot. We cannot ignore one of the strong points of the phone, and that is that this M33 is compatible with 5G. It comes with Android 12 and One UI 4.1 as standard.

The camera is another of the sections that stands out the most from this Galaxy M33. It has, as we have said a little above, a configuration of four cameras, where the main one is 50 MP (f/1.8 aperture). This is accompanied by a 2 MP (f / 2.4) Macro camera, a 5 MP (f / 2.2) ultra wide-angle camera and a 2 MP (f / 2.4) depth camera. All this section will allow us to take some great photos in all kinds of situations, as well as being able to record video in 4K and 30 fps. The front camera is not bad at all to make video calls with your friends, since it is an 8 MP camera with an f/2.2 aperture.

We cannot finish talking about this Galaxy M33 without commenting a bit on its battery. We are facing a cheap phone, but it has a fairly large battery, specifically 5,000 mAh. With this we will have more than a day of battery to spare, but if we run out we will also have the possibility of using 20W fast charging (the charger is not included with the phone).

This Galaxy M33, which was launched just a few months ago, has a regular price of 359 euros, but if you hurry you can take it home for 239 euros. Run, they fly!

The articles listed contain an affiliate link that reports to ADSLZone a small commission for each purchase. The products that appear here have been chosen by the editors for being discounted, and their appearance here has nothing to do with any agreement with the brands.

The heat wave is back, sleeping poorly is back: how to improve our sleep in summer according to science

The heat wave is back, sleeping poorly is back: how to improve our sleep in summer according to science