The most complete study on the origins of Bitcoin makes it clear: decentralization was always a myth

Possibly the most important academic research in the crypto world to date has been published today. A study that reviews the origins of Bitcoin and makes clear one of its main conclusions: the decentralization of Bitcoin was more a philosophy than something real. At least during its first years.

through the New York Times we know about this study led by Alyssa Blackburn, a data scientist at Rice University. For years, the researcher and another group of scientists from six universities around the world have been collecting and analyzing the Bitcoin block chains, until reaching the first transactions in January 2009.

A gentlemen’s agreement. According to the study, the early years of Bitcoin were sustained because a small group decided not to attack the network when they could easily have done so. That group of anonymous owners somehow collaborated not to interfere, despite the fact that “anonymity is believed to reduce cooperation in general,” according to the document.

During those years, a group of 64 agents have been found to have mined most of the Bitcoin. A much lower number than previously thought, where it was calculated that the weight of the network fell on at least a thousand people. These 64 parties acted in the best interests of Bitcoin, even though they technically did not know each other.

At that time, 51% attacks were very easy to perform. If there are fewer miners, there is more chance that a small group will band together to try to dominate the network. In the early years, it is estimated that a group of about five people had enough power to achieve it. It is what is called “51% attacks”.

As the study describes, in October 2010, there were five six-hour periods during which a miner, one of the first to use a GPU for mining, could have carried out this attack alone. “Surprisingly, we found that potential attackers always chose to cooperate instead,” they conclude. 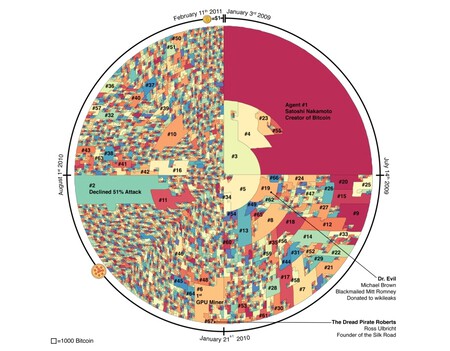 The group of 64 agents that ruled Bitcoin for two years. From January 2009, when Satoshi Nakamoto launched Bitcoin, to February 9, 2011, when the price reached one dollar, the network was in the hands of 64 agents, represented on the map in this article. The supposed anonymity is not so much, since it has been possible to find the address and size of their portfolios. The study concludes that if they have been able to follow the trail there, organizations such as the US NSA could well have had that information for a long time.

Your identity has not been compromised. The researchers explain that they have not identified the names of any of the 64 miners, but warn that if someone did, the privacy of many users would be compromised as “it would be easy to identify short transaction paths linking any destination address.”

But it is “easy” to identify routes. The study explains that 99% of Bitcoin addresses as of 2017 can be tracked with a maximum of six transactions from one of these initial 64 brokers. Six degrees of separation with respect to these 64 agents that show the lack of decentralization of Bitcoin during its first years.

Researchers issue a warning: If a government agency determines the identity of these 64 agents, they could deanonymize almost any Bitcoin address by tracking at most six transactions.

In Xataka | Cryptocurrencies: what they are, how they work and what others exist besides Bitcoin

Design and innovation, Samsung’s two bets in 2022 for its range of smart appliances Bespoke

Design and innovation, Samsung's two bets in 2022 for its range of smart appliances Bespoke