The heat wave that reaches Spain has a name: “Alex”, the first cyclone of the strongest season in years

Spain is painted red again. Little by little, throughout the week, the temperatures are going to climb until they reach values ​​typical of the most intense of summer and, yes, we are still in the middle of June. We already said that the season was going to be tough and here we have the first sign: thermometers will exceed 40 degrees in the south, the center is going to have anomalies above five degrees than usual and, in general, the peninsula is going to become in a wood oven. Again.

The ‘Iberian oven’ is reactivated. The Iberian Peninsula has very specific geographical characteristics that facilitate, with certain weather conditions, very intense “heat production” processes. Things like the lack of cloudiness, the high number of hours of sunshine, atmospheric stability (which traps heat and prevents it from being distributed) and the lack of wind are some of the factors that trigger heat in large regions of the world. country.

The culprit is called Alex. The key to all this nonsense of temperatures is a tropical cyclone y it’s not by chance. Hurricane season has just begun and the first tropical storm, Alex, has turned out to be the strongest since 2016. This is what “breaks” with the usual atmospheric dynamics and plugs warmer air than normal (between 5 and 10 degrees). But, also, it is what makes us have a busy summer. But let’s go by parts. 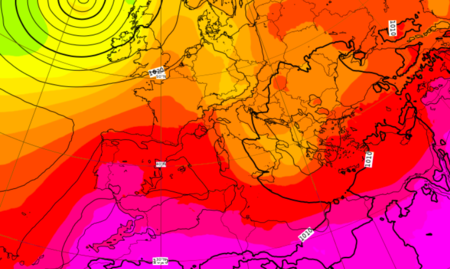 Why do we get cyclones and what do they have to do with hurricanes? In the North Atlantic, the most powerful storms begin to form near the coast of Cape Verde and are pushed by the trade winds to reach the Caribbean, the Gulf of Mexico and the surrounding areas. It is there, where warm waters (above 26 degrees) and adequate depths allow storms to escalate into hurricanes.

From there, the hurricanes go up the east coast of the United States and, pushed by the Gulf Stream, “come back” towards Europe. They usually arrive in Europe very weakened and, although we have many examples of hurricane-force winds, their usual impact comes from the way they interfere with the usual atmospheric dynamics on the continent.

In this sense, once Alex left America behind, the cyclone headed straight for the ocean region between Iceland and the British Isles. It will arrive on Friday of this week and, along the way, it will push the anticyclonic dorsal towards Europe. Something that, translated into common language, means “hot air, sunny days and very little wind”: that is, “Iberian oven” and heat, very hot.

The worst is yet to come? That is the big question that researchers are asking themselves because, with all the differences that we want to point out (and it is that the 2016 season was brought forward five months and was the longest since 1938), the virulence of ‘Alex’ makes us wonder if, as it happened in that season The worst is yet to come. It is still early to tell, but the fly is already behind the ear.

The models are being fulfilled… and that is very bad news. For now, are confirmed the models that point that the anticyclonic ridge will remain strong in medium and high latitudes. This, as we said, will cause many hours of sunshine and no wind: that is, the so-called “Iberian oven” will be at full capacity, generating huge amounts of heat.

Again, we are facing a fundamental problem. Heat waves will increase the pressure on health systems and cause deaths, yes; but they may also put the national water system in trouble. A system that, let us remember, has been in a very complicated situation since 2014. If the models are fulfilled, the summer will be intense, yes; but fall and winter will be a disaster.

And it’s not a figure of speech. Over the next few months, all the experts will be watching focused on the swamps. You just have to look at the graph above to understand it. Despite the fact that this spring we have had very wet months, the levels of reservoir water are very low. It doesn’t matter if we compare with 2021, 2020 or with the average of the last 10 years. If the summer is as the models indicate, we will start the water season in the fall under historic lows. We will have water restrictions knocking on the door and we don’t have a plan to fix it.

Chris Hemsworth and Netflix manipulate emotions with chemistry in ‘Spiderhead’, his mix of Black Mirror and The Squid Game

Chris Hemsworth and Netflix manipulate emotions with chemistry in 'Spiderhead', his mix of Black Mirror and The Squid Game

The year of Linux on the desktop is a utopia. And the reason has a lot to do with jam jars

We have found an 8,000 frog bones buried in a prehistoric site. And we don’t know how they got there