Since 1975, childhood obesity has increased tenfold. For ten. In fact, we hope that in 2022 there will already be more obese than underweight children worldwide. And that’s just the tip of the iceberg: in the year 2016the last one for which we have complete data, more than 650 million people suffered from obesity and, as a result, today, more people die from obesity than from traffic accidents.

It is a pandemic; silent, but pandemic after all. And worst of all, our tools to combat it are really clumsy. Now a new drug can change the playing field.

A pandemic that we do not know how to control. If we look at the whole picture, we can see that our inability to deal with these problems from a medical point of view is not something characteristic of obesity. In general, non-communicable diseases (mainly due to our lifestyles) are the main cause of death worldwide.

However, we do have effective drugs to treat some of them: an obvious example is statins and their key role in controlling cardiovascular disease. In the case of overweight control, until recently, the approaches focused on pharmacological treatments based on the so-called “anorexigenic“: Medications that, due to their antidepressant nature, reduce appetite, but have quite significant side effects.

A new generation of medicines. But in recent years, a new generation of diabetes drugs has shown surprising efficacy in controlling obesity. In 2021, the FDA approved semaglutide which was capable of producing weight losses of around 15%. That 15% was not much, but the returns in the field of health (if there were no extra complications) were huge.

Since then, the results have only improved. The latest to join the pharmacological arsenal (from the United States) is tirzepatide. The New England Journal of Medicine acaba to publish a study showing weight loss of 21% with a weekly injection of 15 milligrams of this drug. In terms of real weight: it is equivalent to lowering the average weight of the participants from 104 to 82 kilos. All this with mild and transient side effects. 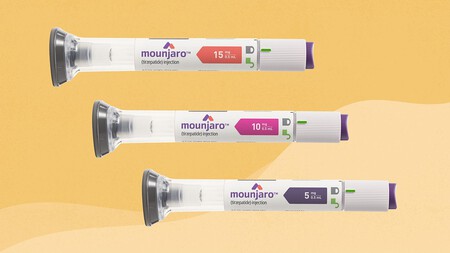 How does it work? In general, the new antidiabetics are drugs that act on the hormonal mechanisms that regulate blood sugar control. If we focus on tirzepatide, it is the first drug able to activate a very specific part of these mechanisms: the GLP-1 and GIP receptors. These two elements are part of the ‘incretinas‘: a series of hormones that are produced in the intestine and regulate the body’s response to food consumption (increasing insulin secretion and lowering blood glucose). Tirzepatide mimics this natural process of the sugar cycle and, by intervening at this very basic level, allows much finer control than previous drugs.

Not in Spain. Even. Without going into aspects related to lifestyle (where there is a lot to cut), the truth is that this race to find drugs capable of controlling obesity is very good news. As we said before, we have a very serious problem and all help is little. Fortunately, the results are surprising.

Unfortunately, all these advances are something still very concentrated in the United States. In Europe it costs a lot approve this type of medication. There is no doubt that they will arrive sooner rather than later, but it seems that the continent is waiting to see what effect do these types of drugs have (and the resulting medicalization of obesity) at a social, economic and cultural level. We will have the answer sooner than we imagine.

Netflix creates a new need for us with the ‘Blasted’ trailer: wacky Norwegians fight aliens with paintball guns