IBM’s autonomous ship Mayflower manages to cross the Atlantic. The mission is not exactly a success

Last year we learned of the intentions of IBM, which had ambitions to replicate the legendary voyage of the Mayflower in 1620 from Plymouth to Massachusetts. A trimaran baptized with the same name and full of sensors and cameras wanted to redo that journey without a crew, and it has finally succeeded… more or less.

Wait, this is Canada. The new Mayflower did not reach the same destination as the original, and in fact she ended up arriving at the port of Halifax, in Nova Scotia, Canada. Did after five weeks of sailing and after several problems that forced the IBM engineers to have to make some unexpected decisions.

Being autonomous is great until it stops being so. The elegant 15-meter-long trimaran is autonomous and has no crew on board, but it would have been nice to have a mechanic. At IBM they explained how “the autonomous system technology worked perfectly, without failure”, but admitted that “we had mechanical problems”. 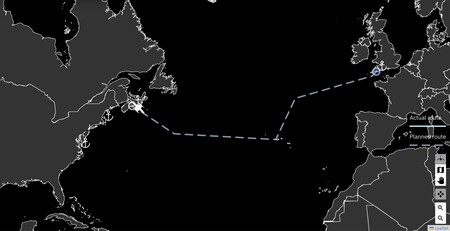 unexpected breakdowns. After leaving Plymouth on April 27, the Mayflower had to make an unscheduled stopover in the Azores Islands, where an IBM team had to travel to make some emergency repairs. At the end of May, with the ship out at sea, more problems: the generator starter batteries had to deal with a faulty charging circuit.

The important thing is to arrive. Finally, and after five weeks of sailing, the Mayflower managed to arrive at the port of Halifax, in Canada. The research company ProMare, which collaborated on the project, ended up having to activate an auxiliary navigation computer that had been installed in case of problems.

In the end that computer and the team decided not to try to get to Massachusetts and instead put bound for the port of Halifax (about 1,100 km away by road), which was closer than any destination in the US. The mission has therefore not been an absolute success, but as is often said, the important thing is to arrive. The milestone is one more step forward in this unique race to get autonomous ships to sail the seas soon: there are already several cargo ships with the same objective.

New operation against pirate IPTV: they ask to knock down dozens of websites

'The House of the Dragon': everything we know so far about the 'Game of Thrones' prequel on HBO

The rocket that crashed on the Moon is a mystery. Now there’s another one: why he left a double crater when doing it

A Japanese lost a USB after a night out. A USB with the private data of 400,000 inhabitants