‘Card Shark’ could become, without a doubt, the most talked about and praised indie video game of the season. With a unique and very personal approach and graphics (like everything done by Nerial, responsible for the ‘Reigns’ saga and its narrative game about ‘Animal Farm’), this new proposal from the studio takes us to the France of the 18th century, where we will have to make our fortune as monumental cheats of the deck

To do this we will have the help of the Count of Saint Germain, a historical character wrapped in a halo of mystery that will lead us to sit at the table of the King of France himself to fleece unsuspecting nobles. And much further, in risky plot antics that will test our skill and memory, and that can even cost us our lives… although as long as there is something left to bet, you can always return to the gaming table.

Con a structure halfway between turn-based combat games and pure skill mini-games, you will become familiar with the vocabulary of cheats: double dice, false mixes and many other tricks that, and here is the great and addictive thing about it, are genuine and certified by historical gamblers. Some of them, world famous although their true identity is not known.

the art of cheating

There is a very accentuated esoteric component in ‘Card Shark’, which is still curious. It is a game that reveals how to cheat at cards, but at the same time, there is an element of secrecy and danger that moves the story away from the world of gamblers and brings it closer to the hermetic world of secret societies. In other words, if Nerial had wanted to make a game about card-handling skill, he would have set the story among expert poker cheats in the Old West, not 18th-century Europe.

That is why the figure of Saint Germain has so much pre-eminence, that as they stupendously glossed our colleague R. Márquez in Vida Extra, is a historical figure surrounded by mystery and legend. And so so much emphasis is placed on a culture of cheating that it communicates underhand in wagons in semi-darkness and in dark cellars: they are not teaching us to live poorly by plucking the unwary. They are teaching us to do magic.

Most, if not all, of the moves that ‘Card Shark’ teaches the player are not only real, but are the same ones used by illusionists who perform card magic. Some are very elementary (pointing out inadvertent points in the deck), others of a complexity only intended for experts (simulating that the deck is completely shuffled and that not a single card moves), but they all belong to the discipline of card magic. Does that mean that ‘Card Shark’ is actually a game about emulators of Tamariz?

No: it means that many of the techniques in card magic are inspired, at least in theory, by cheating tactics. I am convinced, therefore, that ‘Card Shark’ drinks between the lines of a book that is wrapped in an esoteric mystery comparable to that of the characters that swarm through the game: ‘The Expert at the Card Table’, by SW Erdnase. And I say “between the lines” to say the least: one of the achievements in the game, the one you get without losing a single card game, is called “Erdnase, what Erdnase?”, so Nerial is very aware of the wanderings of the writer.

But… who was Erdnase?

SW Erdnase is one of the great mysteries of magic. As Ricardo Sánchez explains in an article in number 2 of the magazine on the history of magic ‘Master Coral’“‘The expert at the gaming table’ is the bible of modern magic. And it has everything to be. It is not known who really wrote it, it is based on a fiction and its influence has more to do with scholars of the text than with the text itself. But it is also El Dorado of magic. Perhaps not so much the book itself, that we don’t know where it is, but the search for the author’s identity”.

”The expert at the gaming table’, or ‘The Expert at the Card Table’ is, theoretically, a manual for cheating at cards. With a very peculiar irony in the texts, the book unravels one after another and punctuated by magnificent illustrations by MD Smith (which have surely inspired the graphics of ‘Card Shark’) all kinds of ways of dealing previously located cards, shuffling in false in dozens of ways, peeking at cards at different points in the deck… multiple tricks that I couldn’t stop thinking about every time the game explained a new way to cheat. 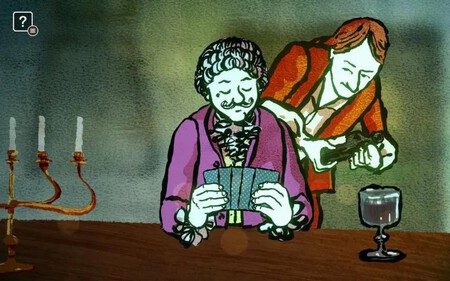 But in reality it is a book of illusionism. Many of the cheats it proposes are impracticable in a real game, and its playful tone makes it an undoubtedly useful volume for gamblers (no one is bitter about knowing how to shuffle without moving the ace of hearts on top of the deck). deck), but which, quite possibly, is written by a magician.

Because what we do know is… we don’t know who Erdnase was. In theory it is the pseudonym of a gambler who signed as a pseudonym to protect himself, but there have been different theories. The most folkloric: the mathematician and lover of illusionism Martin Gardner thought he was Mark Twain, but also talks about the scammer MF Andrews. That theory was discarded over time, since Andrews was practically illiterate. 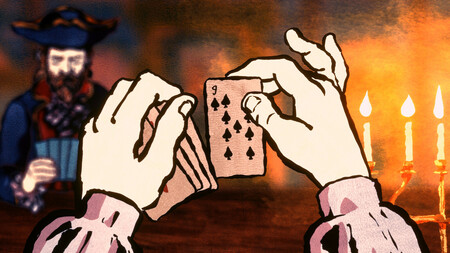 In 1999 scholars David Alexander and Richard Hatch proposed mining engineer Wilbur Edgerton Sanders and lawyer James DeWitt Andrews, among other candidates. Hatch recognized that neither possibility was testable with complete certainty and that we may never know for sure who Erdnase was.

The mystery is part of the charm that surrounds a book, on the other hand, devoid of all mysticism: it is a practical, direct manual, and with such theoretical depth that some of the most important magicians in the world, such as the mythical Dai Vernon, one of the fathers of modern illusionism, Marlo or Darwin Ortiz have published annotated versions. All this without knowing who its author really was or where his mass of wisdom comes from.

‘Card Shark’ is, like ‘The Expert at the Card Table’, a multi-layered mystery. Both seem to deal with one topic but in reality they are about others. Both disguise authentic cathedrals of deception with simplicity and frontality.. Both are surrounded by a very peculiar halo of lies, games and deceit. Both are monuments to the ludic lie and in both cases, we will continue talking about Nerial’s game -as we have done with Erdnase’s book- for many years.

Teleworking as a norm continues to gain popularity among technology companies: NTT extends it to 30,000 employees

Xiaomi POCO X4 GT: power in abundance at a knockdown price to aspire to become the new bargain mobile