inDriver: how an obscure app born in Siberia has ended up conquering the world of car travel

The Sakha region, or Yakutia, a huge republic integrated into Russia and washed by the Arctic Ocean, has many good things. Its incredible landscapes. Its culture and history, very rich. But of course it is not a suitable place for people who do not like the cold or drive.

In its capital, Yakutsk, they have come to see how the thermometer dropped to -64ºC. Regarding transportation… From the collapse of the USSRin the 90s, moving around the territory was not easy and it is not strange that whoever wants to reach many of the municipalities of the republic has no choice but to resort to taxis or, directly, to private vehicles. And that, with a hell of a cold and in a region six times the size of Spain, is not an easy task.

Around 2012 Aleksandr Pavlov, a young electronics student at the Yakutsk Northwestern Federal University, I was fed up with that stage. He is from Mayagas, a three-hour drive from the capital, and moving between the two cities was a hassle. He, too, was not very happy with the comfortable position of power that the local taxi companies had achieved.

What did? Well, something quite effective and simple. What relates to Rest of Worldthrew hand of Vkontakte, the popular Russian social network, and created a group of drivers interested in covering those trips at reasonable prices. His idea was not very scientific: he wanted to unite drivers and passengers. But it worked. And very well, too. In a matter of months the list added 50,000 names and it already included telephone numbers, routes, prices and even comments. It was so successful and so promising that it attracted the interest of a local businessman, Arsen Tomsky. He had put inDriver’s seed.

From Siberia to the roads of South America 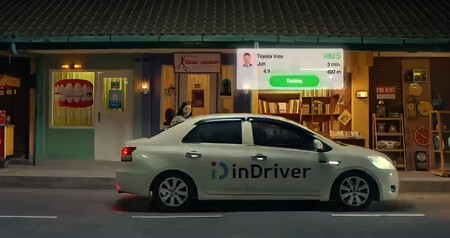 It may not be as well known in Spain as Uber or Cabify, but inDriver is today —according to data from Data.ai— one of the most downloaded private transportation apps in the world. Addition 120 million and is available in 625 cities spread throughout 42 countries. You can find it from Brazil to Indonesia, passing through Nigeria, Nicaragua, Thailand, Mexico or Egypt. At the end of 2018 he starred in an attempt to land in New York as well.

and its expansion not limited to the map.

The growth has been so disproportionate that it has ended up establishing its headquarters in one of the Meccas of innovation, Mountain View, and in 2021 it achieved the status of “unicorn company” after closing an investment round of 150 million dollars. In 2021 its valuation was calculated at 1.23 billion.

#inDriverInArgentina | we have arrived in Argentina! inDriver brings more choice and transparency to Buenos Aires, the most romantic city in Latin America. pic.twitter.com/KR8fgVL7Lc

The million dollar question is, how do you get up such a service starting from a rudimentary list to move around a remote region of Siberia? Basically, keeping the same philosophy that allowed him to start in Yakutia. Perhaps its frozen wastes and the hot roads of Nigeria or Egypt are very different, but inDriver has shown that, when it comes to mobility, in a way what works in one can also work perfectly in the others.

One of the great characteristics of the service, closely related to the culture of Yakutia, is haggling. For many services, the app suggests a rate, but then it is the drivers and passengers themselves who negotiate and agree on it. The company calculates Thanks to its mechanism, trips are 20% cheaper than with other services. In fact, it ensures that, apart from the negotiations between users, the minimum that it establishes per route “is always significantly lower” than what users of other similar applications can pay.

Another of its peculiarities is that allows cash payments. Moreover, metallic seems the most common option. On its website the company clarifies that if you want transfers you must indicate it before and that payments by credit card are not accepted. The tool is also suitable for long trips.

With these peculiarities, inDriver differs from other apps, such as Uber, although it also shares some features with it. Users can rate the services and based on this and other indicators —the number of completed routes or complaints, for example— the company sets a system of priorities for its drivers. As for the commissions that he takes, Rest of World points that the global average is around 9.5%, which would place it below other more popular platforms and reinforce its appeal to drivers themselves.

Here are some key updates we’ve added for drivers 💚:
🚗 In the Android version of #inDriverany address can be copied to the clipboard by tapping on it. We’ve increased the number of screens in the app where this can be done
🚗 Requests now appear in the feed much faster pic.twitter.com/ydByZ6DkBc

What is going great in some markets, yes, can represent a hindrance in others.

If the success of inDriver is largely rooted in haggling culture from Yakutia, that same peculiarity has made it difficult for it to break into other markets. Landing would be difficult, for example, in certain Asian countries where price negotiations are not the usual rule, and landing in New York, a city where users are accustomed to closed rates, has not been easy either. InDriver changed its strategy there, opting for longer-distance services and testing —without much success— the option of paying with credit cards.

Neither these difficulties nor the great impact of the Ukraine War – although the company is based in California, its origin is in Russian territory – seem to stop its expansion plans, however. His attention is now focused on breaking new ground and trying his luck in the Australian market. The platform also provides services from home delivery or package delivery.

Not bad for a company with less than a decade.

And born in one of the coldest and most remote cities on the planet.