We already know how giraffes developed their very long necks: by head-butting each other

If during the summer of 1827, you had traveled the 885 kilometers that separate Marseille from Paris, you would have seen something that, surely, you would never forget: a herd of dairy cows, two African servants and a giraffe. No, sorry: the giraffe. Because, between all the gifts that the Pasha of Egypt could have done to King Charles X of France, that huge, beautiful and tremendously bizarre beast was undoubtedly one of the most spectacular.

After all, it doesn’t matter if you are a peasant from Lyon in the 19th century or a zoologist today, the mystery of the giraffe’s neck is something as fascinating as it is unknown. Now we have discovered that we were wrong in almost everything that had to do with him.

The search for why. Soon, the functional explanation of the giraffe’s neck is quite obvious: these creatures (remember that they are the tallest land animal and the largest ruminant on Earth) have long necks so they can easily feed on the tops of the trees. trees.

However, that doesn’t really explain much. If the famous Ukrainian geneticist Theodosius Dobzhansky was right that “nothing makes sense in biology except in the light of evolution,” the real question is how such necks even came to exist. And, in fact, this was one of the great examples that have always been used to “state” evolutionary mechanisms.

Ever since Darwin first outlined the concepts of adaptive evolution and natural selection (earlier, even, because hea former Lamarck hypothesis also famous), the giraffe neck problem has been a central element of biological discussion. 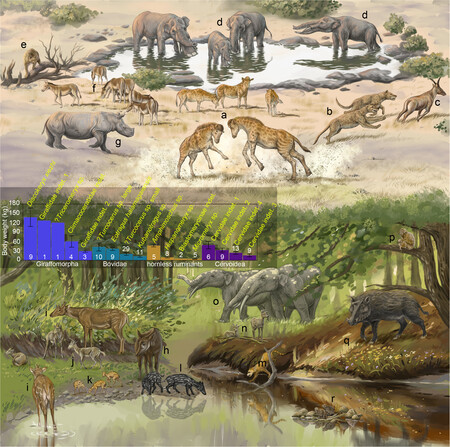 survival of the tallest. The traditional explanation is that competition for food made protogiraffes with longer necks more reproductively successful and, little by little, through that string of subtle evolutionary mechanisms that gave us shape, their necks progressively lengthened in search of the leaves of the highest crowns of the African savannah. It was not only the ‘traditional explanation’, the truth: it was the most logical explanation.

The illogical story of the giraffe. Now, a team of anthropologists has unearthed giraffes from 17 million years ago that may turn the tables. They found that these giraphoid species had a helmet-like structure and especially complex head and neck joints. This was surprising because it may be the most optimized adaptation ever found in vertebrate evolution so far.

“What were those structures doing there?” they wondered. However, analyzing these peculiar morphological characteristics, the researchers concluded that the best explanation is that, in short, they had a fiercely aggressive behavior. Or, what is the same, they gave some really huge headers. That is, it was the ‘sexual’ competition of the males that paved the anatomical ground for the neck to grow. That is why the adaptation of the neck is so rare: because sometimes it is not enough that there are tall leaves in the middle of the savannah.