Next, we are going to review some of these never-before-seen things about Mars that have left us so far in 2022.

Wind raising a cloud of dust

Let’s start with the most recent. Weather sensors on NASA’s Perseverance rover have witnessed one of the most intense dust storms ever witnessed on Mars. During its exploration of Jezero Crater, Perserverance has witnessed numerous dust clouds, but now we have the first images of this phenomenon in action in the first ever recorded video of wind gusts kicking up a huge martian dust cloud.

Perseverance made these observations primarily with the rover’s cameras and a set of sensors belonging to the weather station. Mars Environmental Dynamics Analyzer (MEDA)a scientific instrument run by the Astrobiology Center of Spain in collaboration with the Finnish Meteorological Institute and NASA’s Jet Propulsion Laboratory.

The analysis of the data that MEDA is providing is allowing us to delve into one of the key aspects of the atmosphere of the red planet, the dust that rises from the surface. Proof of this is the article that is the cover of the latest issue of Science Advances.

As the Martian atmosphere is much thinner than Earth’s (about 150 times less dense), suspended dust determines many of its thermal properties and how it heats up and cools down. The Sciences Advances article studies the phenomena that raise dust on the surface of Mars, including the dust devils called ‘dust devils’ and gusty winds capable of producing large dust storms.

The mysterious gate of Mars

Just a few days ago, NASA surprised us with new images of NASA’s Curiosity rover robot in which a kind of gate or entrance into a rock formation, as if it were the construction of an artificial cave. The image was taken in an area known as Greenheugh’s Pediment, by the Mast Camera aboard Curiosity on May 7, 2022, and shared a few weeks later. 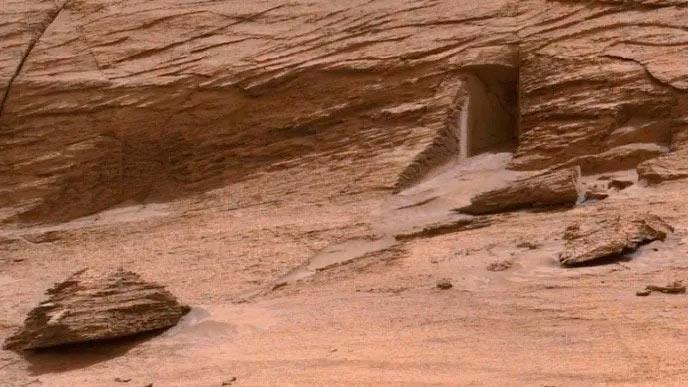 Geologists found a scientific explanation for this opening: it is probably a fracture caused by something called shearing. It would be some kind of tension in the rock that broke part of it. Earthquakes (marsquakes?) may even play a role, as the largest detected on the Red Planet dates back to May 4 this year. “This type of open fractures are common in bedrockboth on Earth and on Mars,” NASA said in the statement.”

Some of you have noticed this image I took on Mars. Sure, it may look like a tiny door, but really, it’s a natural geologic feature! It may just *look* like a door because your mind is trying to make sense of the unknown. (This is called “pareidolia”) https://t.co/TrtbwO7m46 pic.twitter.com/VdwNhBkN6J

“Sure, it may look like a tiny gate, but it’s actually a natural geological feature! It may just look like a door because your mind is trying to make sense of the unknown. It’s called pareidolia.”

On April 25, 2022, NASA’s Mars Ingenuity helicopter, a small remotely operated drone, flew over the Red Planet for the third time. Soaring to a height of 5 meters before accelerating laterally for 50 meters, the miniature helicopter was airborne for a total of 80 seconds, during which it successfully captured the first color photograph of Mars (those captured by other vehicles are digitally processed for color correction).

Third flight in the history books✅
Our #MarsHelicopter continues to set records, flying faster and farther. The space chopper is demonstrating critical capabilities that could enable the addition of an aerial dimension to future missions to Mars & beyond. https://t.co/TNCdXWcKWE pic.twitter.com/Uaxrr23Rfh

The photo shows the rocky landscape of the planet, which is covered by an expanse of sand dunes that are more ocher red and less orange, just as we imagine in our minds. According to NASA, the photo is the “first color image of the Martian surface taken by an aerial vehicle while in the air.”

This is all good news for Elon Musk, whose SpaceX project hopes to have the first people living on Mars by 2030 and an ambitious goal of one million people by 2050.

A "mirror world" to solve one of the biggest puzzles in current science: the Hubble constant

Starlink 2.0 is already in development: this is all we know so far about Elon Musk’s new generation of satellites