Airships are back: the United States is going to build its largest airship since 1930 with the Pathfinder 3

Sergey Brin, co-founder of Google, embarked on a singular mission long ago: the development of a giant all-electric blimp called Pathfinder 3, and a somewhat smaller preliminary version is expected to make its first flight in 2023. The aircraft will be also the largest made in the United States since 1930, and it will be a tribute to the airships that crossed the skies almost a century ago.

Something happens to Brin and Page with the planes. The company in charge of this project is LTA (Lighter Than Air), founded by Sergey Brin. It seems that the co-founders of Google have a particular obsession with air travel, because Larry Page has also been involved in the startup Kitty Hawk for some time.

story within the story. LTA collaborates with the University of Akron in the project, but also makes use of the Goodyear Airdock, the gigantic hangar that was built in 1929. It could fit 8 football fields, and it was where, for example, the USS Akron airship was built and two years later, in 1931, the USS Macon, which measured an incredible 800 feet from nose to tail.

It will work with two gases: the first, helium, which will provide lift. The second, hydrogen, thanks to the batteries that will use this gas and that will provide energy to the electric motors. Lithium-ion batteries used in electric cars are too heavy, and this alternative will allow long-range flights for these aircraft. 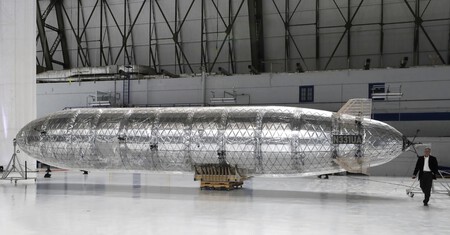 LTA showed its ‘baby airship’, a small prototype of what the airships it plans to build will be. Source: Beacon Journal.

More for goods than for people. Possibly many of you remember the image of ‘Indiana Jones and the Last Crusade’ with Sean Connery, but it does not seem that this airship is going to be destined for the transport of passengers, but rather for freight. In fact, the “vision” of LTA is to take advantage of these aircraft to assist with large transports of humanitarian aid in areas that are difficult to access by plane. Pathfinder 3 will be capable of transporting 20 tons of material and traveling 16,000 km using electric and non-polluting propulsion.

a peculiar structure. As Reveal yourself in the patent that LTA achievement in 2021, the airship design is somewhat different from what was used a century ago. Normally these aircraft were kept “parked” while their rigid structure was built. Workers had to climb to great heights, which added challenges to the construction.

The patent speaks of a “roller coaster” structure that allows the aircraft to rotate on its central axis during construction, being able to “turn” it so that the workers are always at ground level. A method for producing components in 3D printers that work with carbon fiber is also mentioned.

But let’s go step by step. This week LTA offered a tour of its facilities and showed a prototype of the Pathfinder 1 that will be built in California and will have a wingspan of about 130 meters. Of course, you have to go step by step: those responsible for the project affirm that they hope to start building Pathfinder 3 this year, with its first flight taking place in 2023 or 2024—they’ve already done a preliminary flight with a prototype a few months ago. If all goes well, they say, they will be able to build even larger aircraft, and they are already talking about wingspans of 1,000 feet, about 300 meters. Airships are becoming more and more fashionable, it seems.

Japan breaks the data transmission record with 1.02 petabits per second. And with a fiber compatible with current

You can watch 2 Vodafone TV channels for free in June