Europol announces a great victory against one of the most dangerous malware in recent years. Not so much because of its complexity, but because of the enormous speed of propagation. The highest ever seen, as described by the European police.

In an operation in which bodies from 11 countries have intervened, including the Spanish National Police, successfully terminated and disabled Flubotthe dangerous malware that spread on Android mobiles through false SMS and managed to obtain passwords and personal bank details.

The malware behind the FedEx SMS scam

In Spain, this malware had its peak of infections during the month of March 2021. Flubot is the malware behind the fake FedEx SMS scam. A scam with which it was estimated that there was captured more than 11 million phone numbers, only in Spain. That is, 25% of the Spanish population.

As described by Europol, Flubot was discovered in December 2020 but during 2021 it had a huge increase, mainly in Spain and Finland. The last May, the infrastructure behind Flubot has been deactivated by the Dutch policeputting an end to malware. 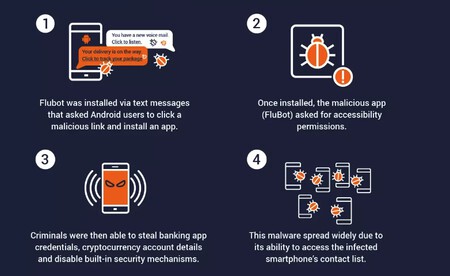 The investigation continues, as it is pending to analyze who was behind and who has benefited from a global malware campaign, although several members of the Flubot gang were arrested in Barcelona last March.

Among the bodies that have participated are the police from Australia, Belgium, Finland, Hungary, Ireland, Romania, Sweden, Switzerland, Spain, the Netherlands and the United States, all of them coordinated by Europol’s European Cybercrime Center.

The malware was installed through false messages. These prompted users to install an app or listen to a fake voice message. Once the app was installed, which was actually Flubot, accessibility permissions were requested. In case of obtaining them, cybercriminals could access all kinds of information since it is as if they were viewing the mobile screen from a distance and receiving all the keystrokes we made.

Europol describes Flutbot as the fastest spreading malware to date. In part because it accessed the mobile contacts and sent the corresponding SMS to all the numbers in the phone book. With each new affected, another SMS was sent to all contacts.