During the pandemic we had to be at home much longer than we would have liked, but thanks to the telephone operators everything became much easier. Now that the Coronavirus has given us a break and we can practically lead a normal life, everything has returned to normal. The operators seem to have stagnated in general, but this has not happened to all. In fact, the MásMóvil Group has published its results for the first quarter of the year and the data is impressive.

These data, as we say, correspond to the period that since January to March of the present 2022. During this time, the MásMóvil group has continued to grow to levels that were not expected, something that has more merit if we see the complicated situation that the mobile operator sector is going through.

As can be read in this Group results report, the income obtained has been nothing more and nothing less than €733 million. This supposes 39% more than the previous year, which is a real outrage. In addition, service revenues during the same period increased by 42% and organically by 7%, to reach €670 million.

In addition, the EBITDA (the company’s income before paying taxes, fees, etc.) reached 277 million euros, while the EBITDA margin increased 3 points compared to the same period of the previous year, reaching 38%. . The entire MásMóvil Group is in a sweet moment, and it recognizes this Meinrad SpengerCEO of the MásMóvil Group:

We are very happy with the results obtained during the first quarter of the year, which makes us optimistic about reaching the objectives set for 2022. The growth rate of the Group remains solid despite the increase in ultra-low-cost offers , which confirms that our customers highly value the high quality of service provided by the MásMóvil Group.

Speaking now of clients and lines, the result has been just as good (or more). When the quarter ended, MásMóvil had to its credit 14.7 million total lines (ie including mobile and fiber). The breakdown of these lines is as follows: 11.6 million are mobile (8.9 million contract, 33% more than last year) and more than 3.1 million belong to broadband, an increase of 48%. During this period, the Group managed to attract 70,000 new broadband lines and more than 160,000 mobile contract lines. 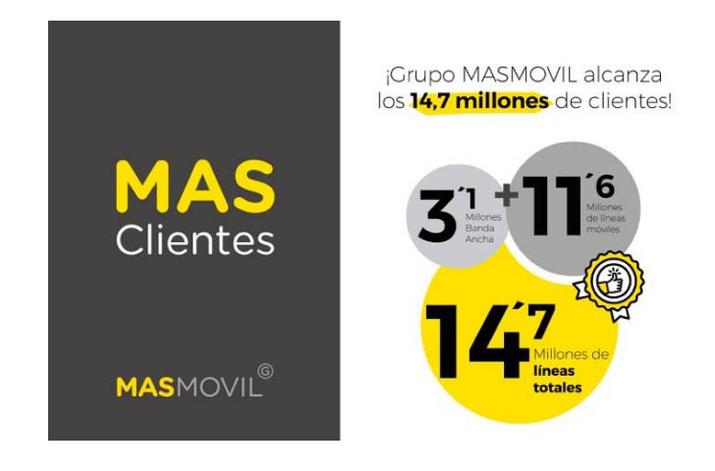 A great investment to give more fiber coverage

All this increase in profits has also allowed the company to invest more to enhance its infrastructure. Specifically, the MásMóvil Group has invested €124 million to be able to currently cover 27.2 million households throughout Spain. In fact, this Group is currently the operator with the greatest fiber coverage in our country.

In terms of mobile coverage, the MásMóvil Group is not far behind. Between its own infrastructure and the agreements it has with other operators, this Group offers 4G coverage in 98.5% of Spanish territory, and offers 5G service to almost 900 towns divided into 40 provinces. Keep in mind that MásMóvil has 80 MHz in the 3.5 GHz band to offer 5G, making it the operator with the largest amount of spectrum per customer in Spain.

We have a problem with Voyager 2. And it is already so far in space that it will be difficult to solve it