After the suffocating heat wave of a few weeks ago, it seemed that the heat had registered in Spain and did not plan to leave us until the end of September. And in a normal year it could be, but we are not in a normal year. For this reason, as soon as the opportunity arose, an Atlantic storm has crept in with all the intention of breaking the meteorological stability and turning the first days of June into a festival of rains throughout the north of the peninsula.

…to gather strength for what’s to come. And it is that meteorologists agree in which all the requirements are met for the summer of 2022 to be “very hot”. To give us an idea, the temperatures that could be one or two degrees Celsius above normal in the interior of the Peninsula and, in the rest of continental Spain and the Balearic Islands, will exceed one degree without hesitation. 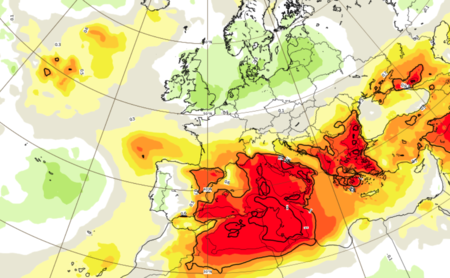 It is not something specific to Spain, that is true. In fact, everything seems to indicate that these anomalies will spread throughout the rest of Europe and only the Gulf of Cadiz and the Canary Islands will apparently be spared. There the thermal values ​​that we expect are the usual ones. To this we must add that it is also expected to rain less than normal, deepening the drought that we have above us.

How can we know this? That is a good question. We have long known that weather models are not good at predicting what is going to happen beyond the next 10 or 15 days. However, there are medium-term models that allow us to draw climatic trends taking into account the general dynamics. We cannot pinpoint when it will rain or on what day it will exceed 40 degrees, but we can know things.

In Meteor’s model, for example, it is forecast that the anticyclonic ridge will remain strong in medium and high latitudes, causing many hours of sunshine and no wind. That is, causing the progressive warming of the entire continental area. This is interesting because, in the best case, it will not be fulfilled. It should not be forgotten that, since 2014, in a situation of generalized drought. In other words, since that year, each season it has rained less than the historical average (1971-2000) and the rains of recent months have only managed to moderate the blow. A dry summer will be a problem for which we are still unprepared.

Xiaomi 12S and 12S Pro: Xiaomi’s flagships launch an alliance with Leica and the most powerful of Qualcomm