The Milky Way as we have never seen it, in 15 stunning photos: Milky Way Photographer of the Year 2022

The Milky Way is one of the dreams of many photographers. It is one of the biggest shows of the night. And now begins the season in which you can best see. For inspiration we have the fifth edition of the “Milky Way Photographer of the Year” organized by Capture The Atlas.

This year, Capture The Atlas, the website that organizes the contest, has awarded 25 photographs that help us travel around the world, from Spain to Australia, passing through Chile, Argentina, Egypt or China. To see it we have to be from January to November in the southern hemisphere and from February to October in the northern hemisphere. And the months of May and June will always be more spectacular. And his mythological story is incredible:

Juno’s milk made those who drank it immortal, something that Jupiter knew from what he himself would have placed there, either Hercules, son of the god and a mortal Alcmene, or Mercury, son of Jupiter and the nymph Maia . In either case, Hyginus narrates how the goddess, aware of the deception, threw the child away and her milk spilled (in the case of Hercules it was the child’s strength and longing that made the goddess wake up).

The challenge of photographing the Milky Way

The most complicated thing is to find it in the sky without light pollution, on a clear night. Then you have to learn the technique and finally, have a good tripod. It is true that there are specific cameras, but some of these photographs are made with simple machines such as a Nikon D610 or a humble Nikon D5500.

Right now you can find the Milky Way with an app (although it’s more exciting than Another way). You just have to give your coordinates and it will tell you where to focus. Then a camera that responds well at night, with a large sensor, a lens as bright as possible (f 2.8), a tripod that can withstand the winds at night and that’s it.

‘Rising from the dust’ Lorenzo Ranieri Tenti, one of the winners in last year’s edition

If you find it, you have to fix the camera to the tripod, open the diaphragm to the maximum, raise the ISO to 6400 and open the shutter for a minimum of 10 seconds… The best trick to know how to expose is to pay attention to the rule of 500.

Five Spanish photographers among the winners 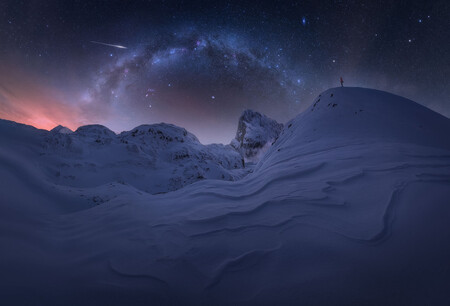 The winter Milky Way in the Picos de Europa mountains in northern Spain. After a heavy snowfall, I was able to enjoy an amazing night of photography in complete solitude. The conditions were complicated. To get to the spot, I first hiked the trail without my backpack, as even with snowshoes, I was sinking knee deep in snow. Once there, everything makes sense: the winter Milky Way, the mountains, the snow, the solitude… And as a gift, a shooting star crossed my lens while I was capturing this panorama. The shapes of snow, mountains and the wintry Milky Way created a magical scene that will be hard to forget.

‘A Balcony To The Stars’ Efren Yanes 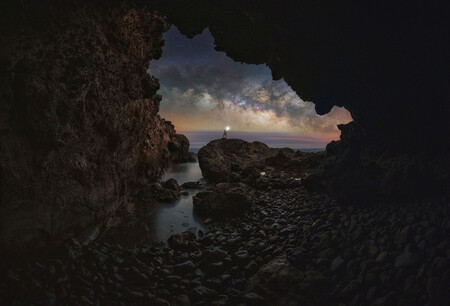 ‘A Balcony To The Stars’ Efren Yanes

Tenerife, in the Canary Islands, has many coastal caves. I’ve been thinking about taking this photo for a long time. The first step was to plan the visibility of the Milky Way and see if it was possible to see the galactic center from inside the cave. I made two attempts, but both were unsuccessful as, to enter the cave, the tide must be low and the sea conditions must be perfect. Finally all the conditions lined up and I was able to take the photo, adding myself as a human figure to give a sense of scale. I was lucky, as this is one of the few coastal places in Tenerife where there is hardly any light pollution.

‘Path To The Past’ Jose Manuel Galvan Rangel 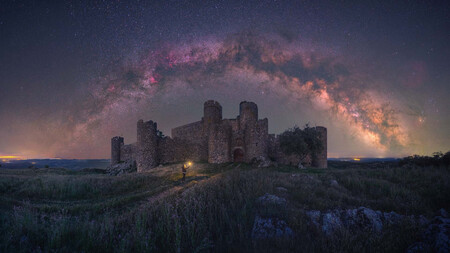 ‘Path To The Past’ Jose Manuel Galvan Rangel

Natural Paradise, that is how the community of Extremadura could be described. Well, not only the flora and fauna of this forgotten region are spectacular, but so are its skies, skies full of millions of stars that seem to light up when night falls, clean of pollution and parasitic lights from large cities. Given the quality of the skies of Extremadura, there are numerous Starlight reserves that can be enjoyed in these wild lands and many are the astrophotographers who choose it as their favorite destination to practice their hobby. On this occasion, the photograph shown has been taken in a remote town to the southwest of said community, Salvatierra de los Barros. A place practically unknown to the world until now, in which we find an imposing privately owned castle that has been standing, under the light of the stars, since the fifteenth century. 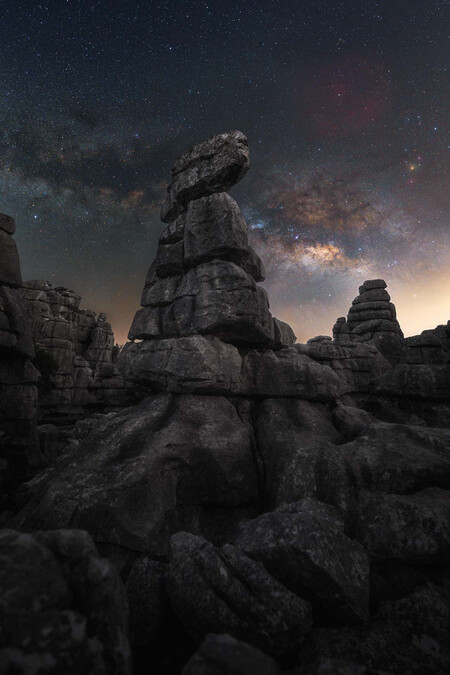 El Torcal de Antequera is one of the most beautiful natural parks in Spain. It is a unique landscape that could easily be the setting for a science fiction movie, with abundant rocks that have been eroded by the passage of time, in an area that was under the sea thousands of years ago. My favorite thing to do in the park is frame rock formations with our Milky Way. To take this photograph, we followed a path and climbed some rocks to access a steep area called “Arco del Arriero”, where water and erosion have sculpted a rock formation in the shape of a dinosaur. Local photographers call this “the magic of the Torcal”, infinite forms that each one interprets according to their imagination.

‘Secrets Of The Night’ Daniel Viñé 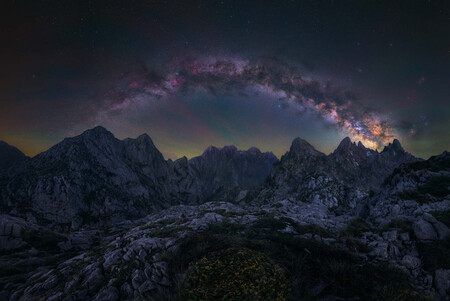 ‘Secrets Of The Night’ Daniel Viñé

I went to this fantastic place in Picos de Europa with my friend and photographer Felipe Souto. To capture this photo, we started walking with all our photographic equipment: camera, tripods, star tracker and everything we needed to sleep on the mountain. After several hours of walking, we were able to camp and began to explore the area in search of compositions. There was no time to lose, since it was almost nightfall. The view was epic; we just had to find a good, powerful foreground. I found a place that I loved, it had a small circle of flowers and it was surrounded by stones and mountains. If I pointed my camera to the south, the Milky Way would appear on the north face of the “Picos de Europa”. I panned at the end of the blue hour to get the most detail in the foreground. Later in the evening, I used the star tracker and my astromodified camera to pan 7 photos of the sky.

Let’s see some of the other winners who have traveled the world to see it differently under the light of the stars with the unique presence of the Milky Way. 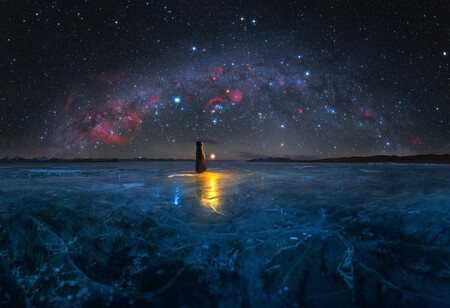 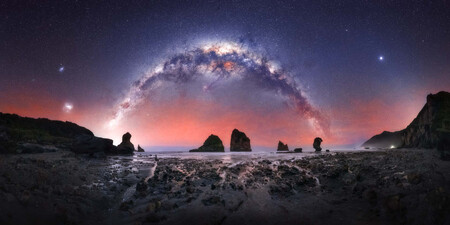 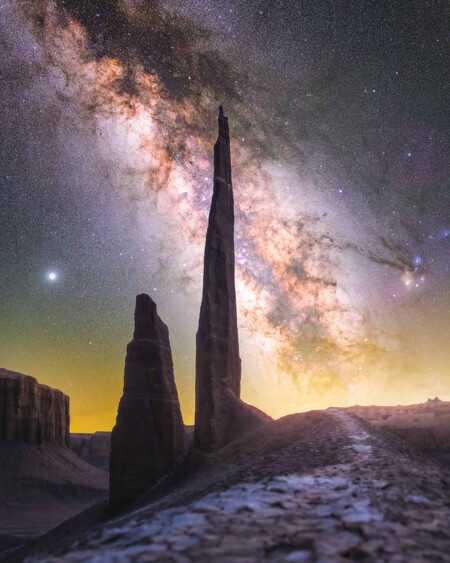 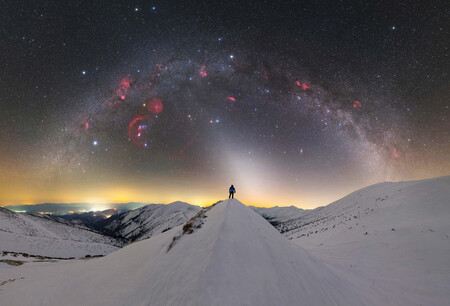 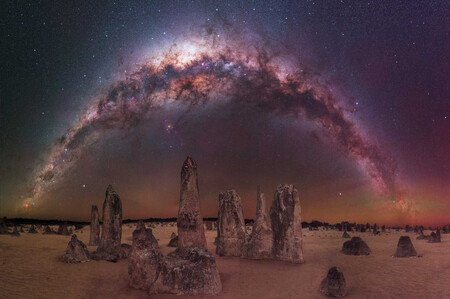 ‘The Milky Way Arching Over The Pinnacles Desert’ Trevor Dobson 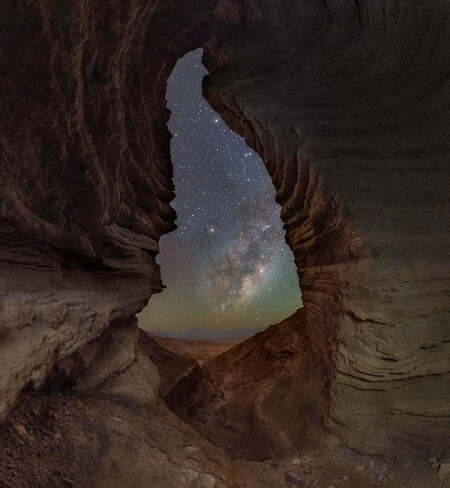 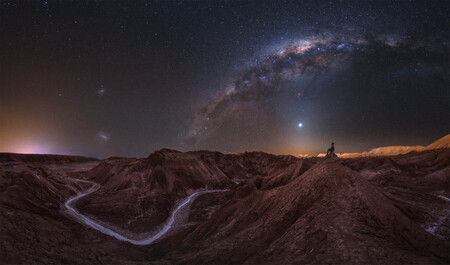 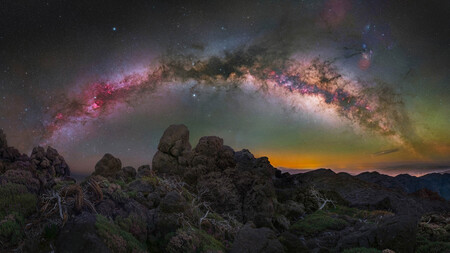 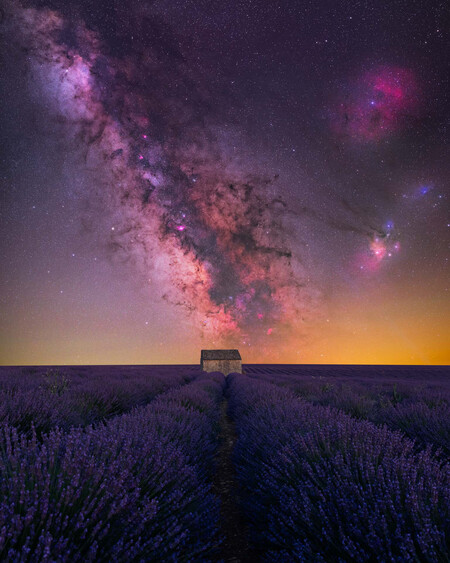 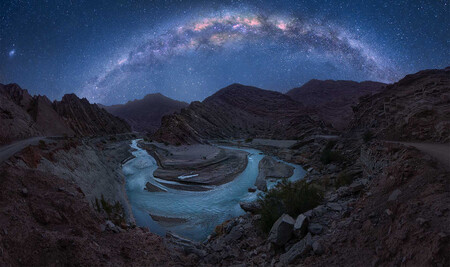 If you want to see all the winners, you can check it on the page of the contest. Surely after seeing all the winning photos you will not hesitate to grab the camera, get lost in the mountains and look for the Milky Way wherever it is.