Frontier, the world’s most powerful new supercomputer, has reached a milestone: breaking the exascale barrier

More than 1,000,000,000,000,000,000 operations per second. The first supercomputer capable of breaking the exascale barrier is here, with a total of 1,1 exaFLOPS. The Frontier has broken all previous records, becoming the most powerful new supercomputer in the world and winning the first place in the TOP500 list.

Built at the prestigious Oak Ridge National Laboratory, the Frontier is based on the HPE Cray EX235a architecture and comes equipped with AMD EPYC 64C processors and an 8.7 million core system.

Theoretically, the Frontier is capable of reaching a peak power of about 2 exaFLOPSwhich is up to 20 times more powerful than Summit, the current supercomputer at Oak Ridge National Laboratory. 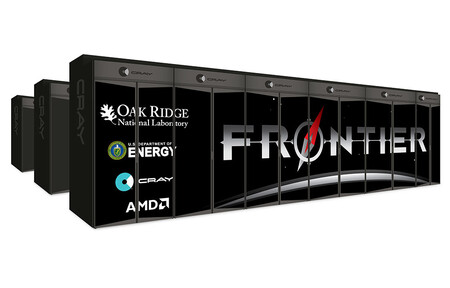 According to those responsible, Frontier “will allow scientists to develop technologies of vital importance for the country’s energy, economy and national security, helping researchers to address problems of national importance that were impossible to solve just five years ago“.

The new supercomputer is not only the most powerful, it is also the most efficient in the world, with a performance of 62.68 gigaFLOPS per watt. This serves to rise to the top of the Green500 list, which reflects the energy efficiency of supercomputers. 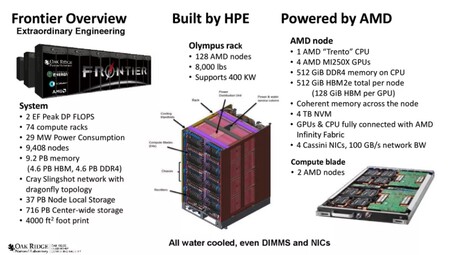 Frontier has been designed from the ground up. New Cray EX architecture combines 3rd Gen AMD EPYC CPUs optimized for supercomputing and AI, along with accelerators AMD Instinct 250X and Sligshot-11 interconnection. In total, Frontier has more than 9,400 CPUs and 37,000 GPUs.

The system comes complete with 700 petabytes of storage and in total, each cabinet weighs about 3.6 tons. To cool the system, about 22,000 liters of water are moved every minute. In terms of energy consumption, the plant where the Frontier is located uses 40 megawattsequivalent to what some 30,000 homes require.

Once the power of the new supercomputer has been verified, Frontier is prepared to be used by the scientific community between the end of 2022 and the beginning of 2023. The Frontier project was initially planned for 2021, but the pandemic has slightly delayed its arrival.

After an investment of more than 600 million dollars, the United States once again clearly claims dominance in world supercomputing. China y Japan They’re working on it, but the Frontier will go down in history as the first to officially break the exascale barrier.

No one pays for a high-end Android: the iPhone 13 monopolizes sales in this segment