Offshore wind power begins the countdown to add a new park to its map. And not just any one. A few days ago Equinor started riding the turbines of which will be the largest floating offshore wind farm of the world: Hywind Tampen. In total, it will add 11 Siemens Gamesa wind turbines of 8.6 MW that will allow it to reach a global capacity of 94.6 MW. The company hopes that the installation can start up during the third quarter of this year.

Hywind Tampen’s dozen or so turbines will be deployed 140 kilometers from the Norwegian coast, in an area where depths of about 300 meters are recorded. To achieve this, those responsible will use floating concrete structures with shared anchors. Its gigantic rotors will be 167 meters in diameter and the blades will be 81.5 meters long.

The new plant will not only stand out for its number of wind turbines, size or capacity. Once it is active, it will present another equally interesting peculiarity: it will be the first floating wind farm in the world to be used for feed platforms offshore oil and gas.

Save tons of CO2 per year

The energy produced by its turbines will be used to supply Snorre A and B and Gullfalks A, B and C, located in the waters of the North Sea of ​​Norway. It is estimated that thanks to its 94.6 MW capacity, the new offshore wind power plant will be able to satisfy around 35% of your annual demand of energy, a percentage that could increase when the wind blows with more force.

“It will be a test bed for the further development of floating wind power, exploring the use of new and larger turbines, installation methods, simplified moorings, concrete substructures and the integration between wind and gas power generation systems” , points.

We have now installed the first turbines at Hywind Tampen in Norway, in partnership with @Equinor. Once fully installed, this will be the world’s largest floating offshore wind project #Leadingtheoffshorerevolution

By cutting the use of gas turbines on the platforms, the park will help reduce CO2 emissions in more than 200,000 tons per year, which —calculate the company— equals the annual emissions of 100,000 private cars. Also note the savings nitrogen oxides (NOx).

“Together with our partners in the Snorre and Gullfaks fields, we adopted a final investment decision (FID) in October 2019 and awarded key contracts for the 5 billion NOK project. [493,5 millones de euros] in the same month”, points out the company. 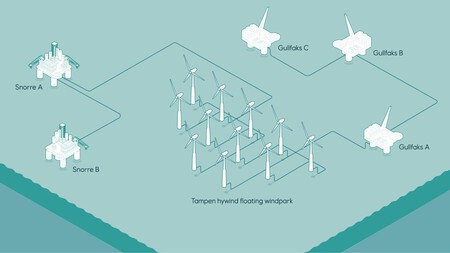 The wind turbines have been assembled at the Wergeland base in Gulen, located in the west of the country, and the installation of the first wind turbines has begun just a few days ago.

14 websites with telecommuting offers where you can find remote jobs

Arthur C. Clarke, author of '2001', claims that the future cannot be predicted in 1964. And then he predicts the internet

Movistar launches fiber of 2 gigabytes of speed, but not in Spain

Sky Bridge 721, this is the new and spectacular longest suspension bridge in the world