The crazy story of Sealand, an old floating platform turned into an independent and inhabited micronation

There are countries forged around conquests, dynastic alliances, wars, by the sheer caprice of geography, a sense of belonging rooted in a shared culture, language and history, or even based on something as prosaic as common interests and enemies. And then there’s the principality of sealanda nation born directly from the love of one man for pirate broadcasting.

That and a good dose of morro.

And improvisation in times of war.

In the genesis of Sealand is all that and a few other ingredients that would do well for a political tragicomedy, a movie that by dint of sticking to reality and the true facts would end up being deliriously unlikely. A funny hybrid between ‘Braveheart’ y ‘Waterworld’.

From defense outpost to micronation

Let’s see, in summary: Sealand is an old fortress built by the United Kingdom in the North Sea that in 1960 declared itself an independent state and has since then, with all pomp, held the self-appointed title of smallest micronation in the world. Mimbres has for it, of course: with its 500 m2next to him the Vatican or Liechtenstein are authentic mega countries.

Sealand has its own royal family, currency, aristocracy—at least not long ago you could join the Principality’s select club of nobles for about 40 euros—, stamps and postage to send letters that will hardly get anywhere without the help of a boat… Oh, and a hymn worthy of the USSR which seems to merge the theme of ‘Jurassic Park’ and the imperial march of ‘Star Wars’.

How is all that possible?

To understand it, you have to go back to the 1940s, to the Second World War, when the United Kingdom decided to build fortresses to protect its coasts. With the Nazi bombers buzzing over London and other British cities, the absolute priority was to shield the country’s coastline and create marine bases where anti-aircraft artillery could be fixed. How appropriate was the place where those towers were installed… That was the least of it, minutiae for times of peace.

Result: The United Kingdom deployed its famous Maunsell fortresses along the estuaries of the Thames and Mersey rivers and at least one of them, the HM Fort Roughs, a platform raised on two huge concrete pillars, was anchored in international waters, outside the territorial limits of Great Britain. In the 1940s the Maunsells rendered a valuable service; but once the war was over and over the years they ended up becoming enormous hulks, a nuisance for navigation, large rusty mounds that would make any fan of the game salivate. steampunk.

There were those who saw something more in the lonely and rusty silhouette of HM Fort Roughs. Wide, isolated, in international waters but at the same time just 13 kilometers from the Suffolk coast, that old platform soon presented itself as El Dorado for radio pirates.

It may sound strange today, but in the 1960s the BBC had a monopoly on radio in the UK and those who wanted to break away from their monochromatic programming and enjoy the new popular music coming from the US were forced to resort to pirate stationsas Radio Caroline or London, which came to broadcast from ships. So serious was its competence that in 1967 the Government ended up approving a law on maritime crimes to outlaw pirate broadcasts from the sea.

In that context HM Fort Roughs and its “libertarian waters” They were almost heaven.

Several pirates saw it. and he saw it Paddy Roy Bates, character as colorful as intelligent. A few years earlier, in the early 1960s, Bates, a former British Army officer turned fisherman, had launched his own pirate station, Radio Essex. To broadcast he had installed all his equipment in an old abandoned naval fortress, Knock John; but the English Government wasted no time asserting their dominion over him and compelled Bates to collect his gear and dislodge it. 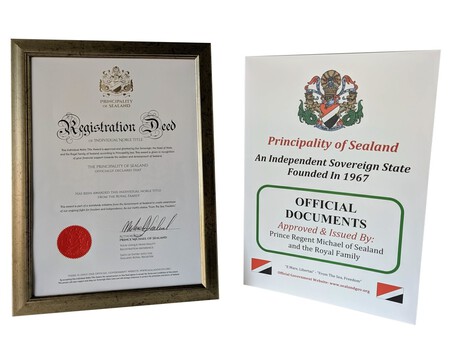 “What to do then?”Bates must have thought.

On the table he had two options. Let him go, forget about Radio Essex and continue his placid existence as a veteran and fisherman or find a new place to settle. He opted for the latter, of course, and saw no better candidate for his plans than another sea fortress, further offshore than Knock John, far enough to escape British control: Fort Roughs.

It was set there on Christmas Eve 1966 and took control of the platform from which the British soldiers had observed Europe in the 40s. However, Bates did not take long to ask himself a question: that thing about pirate radios was very good, but… Why not take advantage of the situation, the peculiar condition of the old military fortress , and declare it as independent state?

As if it were a birth, nine months later —September 2, 1967— Bates raised the Sealand flag in a ceremony with as much pomp and delirium, flanked by his family and friends. A new micronation had been born in the seas of the world. The date was not accidental. Bates chose the birthday of his wife, Joan. There are those who in these cases give flowers, chocolates or a sweater and who, like Bates, give his wife a princess title.

The normal thing, the expected thing in 1967, would have been that that pro-independence outburst led by a former officer and an old overseas platform that was not the size of a football field would have remained at that, a curious anecdote in the pages of the local press from Suffolk; but if Paddy stood out for anything other than his determination, it was his intelligence. 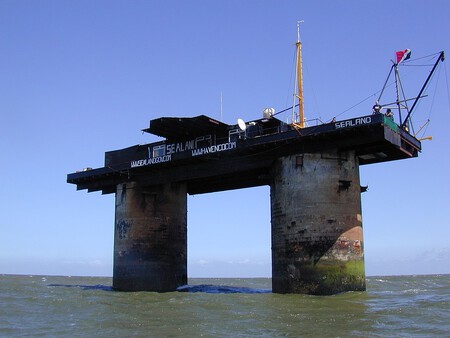 The old radio amateur was able to interpret the legislation in his favor and entrenched himself in that rusty piece of iron located in the North Sea, 13 kilometers from the coast, of which he proclaimed himself sovereign. in the mid 70’s even drafted a constitution and adopted its own official currency. No state recognized his peculiar micronation, of course; but –as he proudly explains Prince Michel, Paddy’s son—the truth is that they hadn’t asked for any recognition either.

In their good years in Sealand they came to live fifty people and the platform became something of a symbol, an epitome of rejection of British authority. The motto adopted by Sealand already made it clear as a business card: “And Mare, Libertas” (From the sea, freedom).

That from doors to outside. Inside the old HM Fort Roughs it was a lot less epic. “nothing was working. We started with candles and then moved on to hurricane lamps and pump generators,” remembered years later Michel to… —Irony!— the BBC.

Perhaps if the fortress had been in a less strategic, less attractive and, above all, central location, its history would have gone unnoticed. After all, to get rid of that peculiar micronation, the Government had only to wait for the platform and its dynasty to grow old. No more. The fact is that his enclave, in the North Sea, at the gates of the United Kingdom, did not go unnoticed and began to scale the authorities. In some classified document, the high command of the country they came to cross it out as a “Cuba off the east coast of England”.

Passports, stamps, anthems, flags and royal houses aside, what Sealand does resemble other nations is that its history is dotted with clashes and the occasional violent episode. On its official website It is related how shortly after the Principality was proclaimed, the British army flew over the area and dedicated itself to destroying other similar bases in international waters. On one occasion —they say from Sealand— they even gave warning shots. 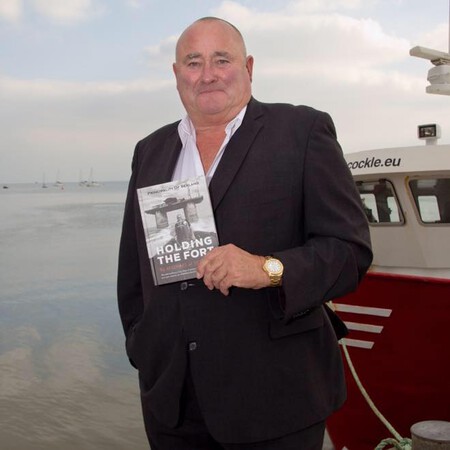 The most curious episode However, it happened a few years later, in 1978, when a German lawyer hired a group of mercenaries to take over the platform, taking advantage of the fact that Paddy and Joan were in England. The lawyer in question had obtained one of the passports issued by Sealand, so this was presented as a kind of coup.

The problem? The boarding was a disaster and the aspiring prime minister ended up becoming a prisoner of Michel and his friends, armed on the platform with machine guns, and accused of high treason. The good lawyer was detained for weeks under $35,000 bail and his release required the intervention of a German diplomat, which for Paddy and his crew was better than any military victory: in those meetings with state people of the German Federal Republic (RFA) finally saw a kind of official recognition of its status.

Whether or not what had happened was interpreted as de facto recognition, it was of little use to Paddy and his subjects. In 1987 The United Kingdom expanded its marine strip enough to leave Sealand within the national territory. That could have been the final blow to the aspirations of the platform, but the Principality of the North Sea was not willing to give up and continued to do its own thing, acting as the smallest micronation in the world and expanding its citizen base. .. and even his peculiar list of aristocrats, all by microdonation.

In 2007 the family came to put the nation up for sale without much success about 750 million euros and in 2012 he hoisted the flag for Paddy’s passing. Since then the throne is in the hands of his son, Michael Iwho at least in 2020 combined his responsibilities as monarch of the Principality of Sealand with an export company of cockles.

at least in 2017 Sealand welcomed two people permanently. Curiously, Michael I had his residence on the coast. For now, and perhaps in a new chapter of the peculiar history of the micronation, has started to be interested now for cryptocurrencies and NFTs.

Someone has created the smallest robot in the world: it is shaped like a crab and can walk and jump

What would have happened in the Senna accident if the halo, F1’s most crucial innovation, had existed

The Netflix crisis is already charging its first great victim: its workers, on the way to dismissal