Not even the latest 3,000 euro TV comes with USB-C. While the new standard is being imposed on mobiles, tablets and computers, the world of televisions seems anchored in the traditional USB-A. Even the European Union calls for all devices to be charged via USB-C by 2024. Why then is this connector practically impossible to see on TV?

It must be said that the single charger requirement is precisely to replenish the energy, so televisions, which are plugged into the power outlet, would be left out of this obligation. Even so, it is striking that a connector that is gradually disappearing in other devices, is still very present in televisions. And it is not expected that USB-C will land on TV for the next few years.

USB is one of the most useful connectors on televisions. It serves us from play contents on a hard drive or external memory until you can connect a keyboard, a webcam or a mouse. It is so practical that the saying that if something works, it is better not to touch it has ended up being imposed. However, those USB ports also serve to charge external devices. And here the USB-C could fit in.

There are devices, such as the Chromecast or the Fire TV Stick that are designed to be able to be loaded directly on the TV. They connect via HDMI, but a charging cable is included to connect directly to the TV. Precisely on these Smart TV dongles is when USB-C might make senseas opens the door to also send audio and video signals. 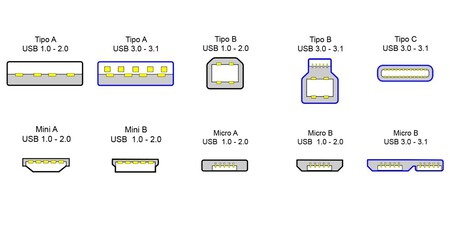 The first reason why USB-C doesn’t seem to be a hit with TVs is because, while it might be useful for certain external devices, the strategy of television manufacturers is to integrate everything. Instead of facilitating the presence of accessories, TV manufacturers want you to not need anything else.

Another main reason is the purely economic aspect. Although USB-C is present in more and more devices, it has not yet become popular enough for this to be the way to go. In case of reaching televisions, it would first do so in the high ranges and later it would be implemented in more models. But neither Samsung, Sony, LG, Panasonic nor the rest of the main brands have added it.

USB-C is a port that fits well on computers, but not so well on televisions. Many of the devices that we usually connect to a television have a USB-A connection and not USB-C. Let’s think of a USB memory stick or a small external hard drive. If TV manufacturers changed USB-A ports to USB-C, many of the old devices that we had at home would become incompatible, requiring a converter at best. Since USB-C hasn’t been with us long enough, the need for it in a TV is still some way off.

Both the PS5 and Xbox Series X come with a USB 3.1 Type-C port, but they still have more USB-A ports. In televisions, this strategy has not yet been chosen and it is time to talk about another point: speed.

It’s important pointing that USB-C is the type of connector and does not necessarily imply a higher speed. The USB-C standard is a mess, because it can operate under protocols as diverse as USB 3.1, 3.2, DisplayPort 1.2 or 1.4 or even Thunderbolt 4, but also with old protocols such as USB 2.0, more common to find with traditional USB ports. A. In both televisions and other devices, it is usual that the USB-A port with USB 3.0 comes differentiated with a blue color.

That said, TVs don’t need that much speed. The video bandwidth required is typically no more than a few Mbps. If we are going to play a movie from a USB and it is in 1080p, the bandwidth under the H265 codec is about 3 Mbps. In the case of YouTube in 4K, we have about 40 Mbps.

Bearing this in mind, we must remember that the USB-A ports with USB 2.0 protocol are more than enough, offering 480 Mbpsaccording to theoretical specifications. Although, if we want to ensure that there are no problems with the bitrate, it is usual that we divide that number by two or even by four. That’s where USB 3.0 comes in, where speeds of up to 5 Gbps are offered.

In TVs, HDMI is king

With these numbers, it’s hard to believe that it’s still necessary to opt for USB 3.1 alongside the USB-C port. These go up to 10 Gbps, but with USB 3.0 it is more than enough to watch movies in 4K at maximum quality. Even so, USB-A would still be an option, since this port is compatible with USB 3.1. It is from USB 3.2 (20 Gbps), when the USB-C port is necessary.

In televisions, devices that require high bandwidth are not connected through the USB port, whatever it may be, but through HDMI. Unless the future USB standard ends up eclipsing HDMIsomething that does not seem close to happening either, televisions will continue betting on USB as a port for common and global use, while they are improving HDMI ports to offer maximum potential.

Take this 55-inch LG OLED Smart TV with a discount of almost 1,000 euros

Send messages or call by WhatsApp to a foreign number, is it free?

Do we have to turn off Bluetooth when we are not using it?