The normal thing is that when you buy a laptop, a printer or any other peripheral with an external power supply, it occupies a significant space. We’ve gotten used to real bricks that are responsible for providing power to our devices, but that could change in the short term.

To solve it, the gallium nitride (GaN)a binary alloy of semiconductors that is being applied successfully to create very powerful power supplies and adapters that take up a fraction of traditional versions.

Traditional chargers usually use silicon as the main material, but the rise of fast charging systems has led to the appearance of that alternative called GaN that offers very small but surprisingly powerful fast chargers. 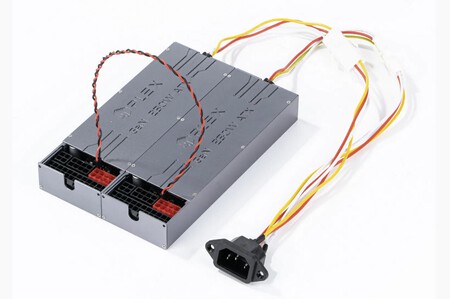 These GaN chargers have been proving their performance for some time in the mobile worldbut little by little they are also appearing in the field of laptops and even desktop PCs.

We have the last demonstration in the small power supply created by the HDPLEX company, which has designed an ultra-compact passive ATX source that we already found in the aforementioned mobile chargers.

Its dimensions —170x50x25 mm— are surprising and, according to the manufacturer, make it the smallest ATX power supply in the world. This enables it to be used, for example, in small format equipment (SFF), but also in all kinds of projects that seek to reduce space to the maximum for all components.

The source is capable of delivering up to 250W at 94% efficiency, and features a refrigeration passive that also makes it totally silent. The model will be available in June for $145, and it certainly offers a most interesting option for many users.

On Monday the tau Herculidas arrive, an all or nothing show that will cross the sky (or not)

The Drought Islam Brought Us: How a Wild Weather Event in South Yemen Changed the World Forever