On August 18, 2008, the Kosi, a Nepalese river four times larger than the Ebro, changed its course suddenly. The official count speaks of 42 deaths, hundreds of people swept away by the current and more than three million displaced people. It is a bestiality, yes; but everything seems to indicate that it is a conservative calculation because nobody has been able to quantify with precision what that hell brought. It is the most well-known recent avulsion in the world, but it is not the only one and, of course, it won’t be the last. That’s the problem.

When the river changes its course. It doesn’t happen very often, but it does happen sometimes. a river abruptly changes its course. The process can take decades or even centuries, yes; but also hours or a few days. The result is the same: devastating floods and untold damage. I don’t know if it’s a coincidence that, in medical terminology, “avulsion” means “removal”.

These phenomena have been responsible for some of the deadliest floods in human history, including Yellow River flood of 1887 y China floods of 1931, which together claimed some six million lives. Therefore, in recent years, engineers have dedicated enormous efforts to build diversion channels and dams that counteract the dangers of a river’s avulsion. The problem is that, according to a new investigationthose avulsions could happen where we least expect it. 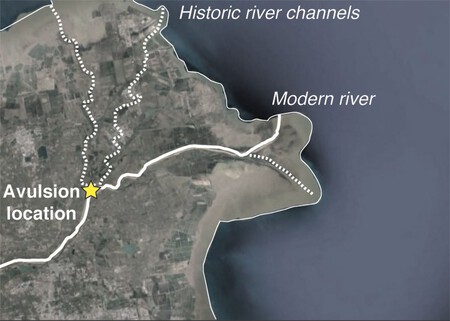 50 years of wild rivers. Sam Brooke and his team (from the University of California, Santa Barbara and Texas at Austin) they realized that we knew very little about how these kinds of sudden events worked. Therefore, they decided to collect 50 years of satellite images to study in detail why this happened (and how to prevent it). In total, they discovered 113 large avulsions in the last half century.

Not surprisingly, the researchers discovered that most of them occurred in the areas near the mouth of the rivers. I say that it is not surprising because the “little” we knew about this process was related to the creation of deltas. However, Brooke and his team discovered that there were other types of avulsions (“located higher than would normally be expected”) that were of concern.

An increasing risk. They are avulsions produced by the erosion of the Earth. Therefore, they occur more frequently in steep rivers rich in sediments (especially in tropical environments and, be careful because this is important, desert). This is a huge problem. Basically, because what the model predicts is that, as the effects of climate change increase, the avulsions will become more and more frequent.

Desertification has been a pressing problem for a long time. 20% of Spain is already desertified and nothing suggests that this will go less. But, without a doubt, the most disturbing thing about all this is that the consequences of this process are still unknown. This is just one example, but in view of what is to come… there will be many more.

China has detected “alien” signals from space. It is less spectacular than it seems