QD-OLED panels are the best thing that has happened to televisions: what certainties and uncertainties this technology leaves us

The first TVs equipped with a QD-OLED (Quantum Dot-OLED) panel are already here. And we have tested them. Just two days ago we published our in-depth review of Sony’s A95K MASTER Series model, a TV with such objectively high image quality that for the first time we decided give a product a 10 in this category. Yes, without a doubt this device marks a before and after in the television market.

The other proposal equipped with an organic QD-OLED matrix that we will be able to find in stores in a few days is the Samsung S95BA OLED model. We have not yet had the opportunity to thoroughly analyze this television in our own facilities, but we have seen it in action calmly during a technical seminar, so we have been able to form a fairly accurate idea about your performance.

At the moment these are the only two televisions equipped with a QD-OLED panel that we will find in the market in the coming months, but their performance invites us to foresee that in the future more will come. Many more. From these brands, and possibly from other manufacturers as well.

In any case, our experience with them has allowed us to discover what their strengths are, what makes them so attractive, and also what margin of uncertainty we are interested in hearing from users given the inevitable immaturity of QD-OLED arrays.

Its image quality is an unappealable bastion

A good television has to satisfy a long string of requirements, but possibly we can all agree that the most important is its image quality. And in this field the two QD-OLED televisions that we have tested they are outstanding. However, everything that I am going to present below comes from our review of the Sony A95K MASTER Series model because it is the one that we have had the opportunity to analyze in depth.

In my opinion, its most important quality, and what really allows the QD-OLED panel to shine, is the volume of color that it is capable of reproducing. According to Samsung, this organic matrix restores 100% DCI-P3 color space, and more than 80% of the BT.2020 space. And my tests after more than a week hitting the A95K hard confirm it.

In addition, its brightness delivery capacity is also outstanding, although in this area LG’s new third-generation OLED evo panels perform at a similar level. The minimum brightness delivery capability of QD-OLED panels, according to Samsung, is 0.0005 nits (the lower the better). and the maximum amounts to 1000 nits. In addition, its residual brightness is 158 nits, a figure more attractive than the 200 nits in which LED-backlit LCD TVs move.

On the other hand, this organic matrix is ​​capable of handling a very wide luminance scale, a property that, combined with a very well-executed image processing, allows the Sony A95K television to recover a lot of detail in both shadow and highlight regions. And, as a bonus, the images take on a three-dimensionality and depth that until now I had only seen on micro-LED TVs, whose price is overwhelmingly higher than that of these first QD-OLED TVs. 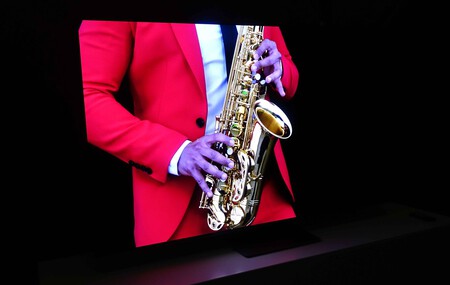 As we have just seen, when it comes to image quality, these organic matrices, after having tested one of them exhaustively, do not cast any doubt. However, what we haven’t had a chance to check yet is whether the physical structure of these panels, which are very different from LG’s W-OLED arrays, boosts your immunity to the retention of static images.

If it is really confirmed that they are less sensitive to burns, it will be excellent news for video game fans.

In theory it should be so, but we won’t be sure until these televisions have been in stores for several months and users have the opportunity to test them for longer periods of time. If it is really confirmed that they are less sensitive to burns It will be excellent news for gamers who intend to get their hands on an OLED TV in the coming months.

The other great unknown that is worth putting on the table is the possibility that other brands will follow in Sony’s footsteps and decide to buy their QD-OLED panels from Samsung to integrate them into premium television.

Currently Panasonic, Philips, Bang & Olufsen or HiSense, among other brands, they bet on the LG matrices in some of its most advanced models, but who knows… Perhaps the landscape will change in the future and Samsung will completely or partially take away some of its customers. We’ll break out the popcorn and watch you carefully from the front row.

7 websites to search the Internet without depending on Google

Germany decided to put all its trains at 9 euros per month. The result is this awesome graph