The jungle hid secrets that were forbidden to men. Literally, in fact. The vegetation is so dense, suffocating and wild that many got lost trying to bring them out into the open. the british explorer Percy Fawcettfor example, began his search for the fabled lost city of Z in Bolivia in the early 20th century and “mysteriously disappeared a few years later,” but in light of what we just discovered He wasn’t too far off.

the signs were there “We have long suspected that some of the most complex pre-Columbian societies in the entire Amazon basin were found in the Bolivian Llanos de Mojos,” explained Heiko Prümers, the head of the team of archaeologists who has just discovered a huge network of structures, settlements and cities that “is on a par with that of any ancient society.”

Until now, our understanding of the Casarabian culture (which developed between 500 and 1400 AD) has been limited to the evidence provided by a few isolated sites. Everything else was beyond the edge of the jungle, under extremely dense vegetation that made it difficult to map the entire extension of the Bolivian rainforest. The researchers sensed that there could be important things, but everything related to this civilization was shrouded in mystery.

But then we learned to look. Or, what is the same, we create LiDAR. It is curious that LIDAR has risen to fame for autonomous cars. However, its origin is even more curious: it is a technology designed in the sixties to measure the clouds. LIDAR stands for “laser imaging detection and ranging” and it is, as its name suggests, a laser measurement and object detection system.

If radars map the environment by emitting radio waves that “bounce” off objects and sonars use acoustic waves, ‘lidars’ use an analogous process, but with a focus that emits infrared laser beams. Thanks to the emitting focus and a receiving lens, we are able to easily obtain 3D maps of the terrain at very high resolution.

In autonomous cars it has become a very powerful tool (although controversial) that allows real-time monitoring of the precise position of millions of points and the distance between each point and the car. In an airplane and together with a GPS and an inertial navigation system, we can achieve precision of less than half a meter in planimetry and 15 centimeters in height — crossing the vegetation cover even in adverse weather conditions. 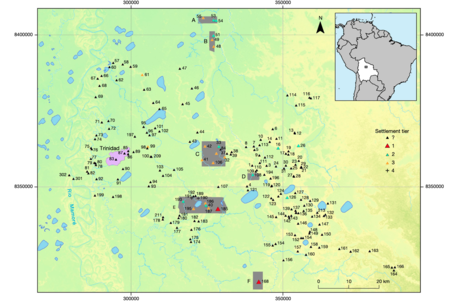 An entire civilization hidden under the jungle. Using this technology, Heiko Prümers and his colleagues examined six zones in a region of 4,500 km2 in the Llanos de Mojos. There they found two large settlement sites (Cotoca and Landívar) and 24 smaller sites. They discovered large earthen platforms, elaborate architecture, canals and water storage systems, and even conical pyramids up to 22 meters high. A level of social complexity that not only did we not know was there, but we believed that it could not exist.

A challenge to our understanding of the Amazon. Traditionally, we thought that tropical ecosystems were incapable of supporting large-scale civilizations. That was disproved as we learned things about the Mayan civilization, it’s true. But most of the specialists considered that Mesoamerica was rather the exception that confirmed the rule.

Little by little, under the tropical forests of Southeast Asia and sub-Saharan Africa, we have been finding remains of great civilizations. However, the southeastern Amazon remained “empty.” Until now. There is still a lot to investigate (and a lot to investigate), but it is fascinating to see how the history of humanity is emerging thanks to technology.

Netflix can still win the streaming war with a checkbook. ‘The invisible agent’ is his big bet

Someone has made a “laptop” with a mechanical keyboard and a strange 41:11 ultrawide screen

Someone has made a "laptop" with a mechanical keyboard and a strange 41:11 ultrawide screen

Airbus flies the A321XLR for the first time, a new long-range aircraft that promises to change commercial aviation

HBO Max premieres in June 2022: all the new series, movies and documentaries