We have modernized tractors until they become high-tech products. And that is a problem

Dave had a damaged hydraulic sensor on his modern tractor a bad day 2015. Lucky for Dave, his friend Kyle Wiens knew a lot about fixing tech: he’s the founder of iFixit. Armed with experience and tools, he set out to repair. He failed miserably. That triggered a curious reality: tractors like those manufactured by John Deere have become high-tech products that do things unthinkable years ago. In fact, it is worth reviewing the many advances that have been incorporated over the years and that offer many lights and a great shadow.

More power, this is war. The first major revolution has happened where it had to happen: in the diesel engines of these machines, which, thanks to the development of high-pressure injection, allow more efficient combustion and more power. Turbochargers, supercharging (forced induction) air or intercoolers (intercoolers) contribute to that increased power make it relatively easy to get 500 and even 600 hp engines. The Case IH Steiger/Quadtrac 620 have an engine with 692 hp, more than the Porsche 911 GT2 RS.

(Fairly) Autonomous Tractors. Autonomous driving is quite a challenge in conventional cars, but the situation is somewhat more favorable in agriculture, where routes are very straight and routine. The most modern tractors can drive straight and turn corners without human intervention, but also pull the implement out of the ground or back in at the end of the turn.

Companies such as Bear Flag Robotics, John Deere, Case IH or Kubota have been developing solutions of this type for some time, although in the case of the former, the difference is that they don’t build tractors: they just develop the software and sensors needed for those autonomous plowing tasks. His bet paid off – never better said – and in August 2021 It was acquired by John Deere. Making autonomous tractors, by the way, is also important because of another growing problem: labor shortages. Also, drones and tractors don’t complain and don’t take kills.

Tractor or spaceship? And if you don’t want a self-driving tractor, no problem: Cabs have evolved to look more like a spaceship than anything else. Case IH, for example, has a new cabin for its tractor Magician AFS Connect in which it offers several touch screens, a “multicontroller” armrest with programmable and backlit buttons, heating, air conditioning, charging ports, heated and ventilated seats and, of course, cup holders. 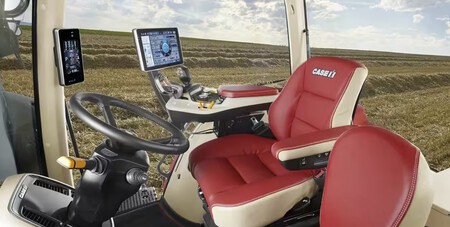 sensors everywhere. This autonomous driving of tractors makes use of the same components that have been driving in cars for a long time: these machines are equipped with cameras, radars and even LiDAR.

Sometimes it is not the tractors that are equipped with this technology, and instead drones are used with a LiDAR that allows the generation of 3D maps of the fields to be worked on. Thus, it is possible to locate trees and establish the direction of the water current in addition to determining the orography and the flow of erosion.

These sensors are joined by GPS receivers that offer even more precision thanks to the so-called real-time satellite kinetic navigation (Real-Time Kinematic positioning, or RTK) and that allow to offer precisions of 2.5 cm and better response times, something important for the operation of tractors. 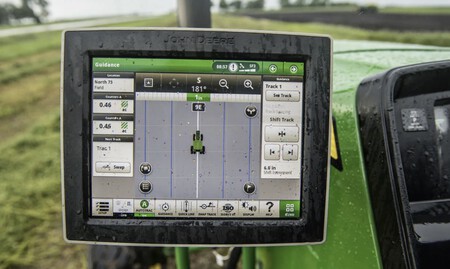 Copying the touch screen to the Tesla. Another of the surprising elements (or perhaps not) of the most modern tractors is the presence of touch screens that allow all kinds of information to be displayed so that the worker can make clearer decisions when it comes to saving fuel or selecting areas in which to work. to work.

Remote control and monitoring. And of course, farmers can control everything online from the cloud. Remote monitoring systems like My John Deere show crop location, fuel usage, speed and log. Full automation is getting closer, making the hard life of the farmer a lot less hard.

Not only that: there are also fleet control tools through remote access, and the manager is also capable of having access to diagnosis and route programming. This is almost like a robot vacuum cleaner, but in a beastly way.

Let the artificial intelligence fumigate. In 2017 John Deere acquired Blue River Technology for 300 million euros, and this has allowed it to provide solutions such as ‘See & Spray‘, a precision spray solution that makes use of a complex technological system.

Included in that system is a computer vision system and deep learning algorithms that detect weeds and activate the sprayer nozzles within 200ms for that smart spray of herbicides and pesticides. There are up to 36 cameras mounted along the arm scanning 195m2 at a time. Spray application is also precise and targeted to avoid over-application and off-target drift. 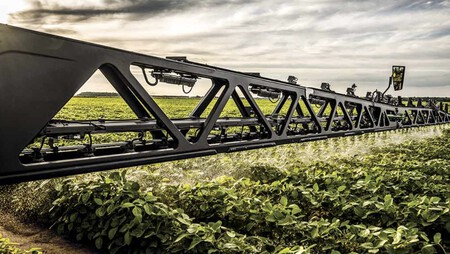 The spray arm has artificial vision systems, cameras and nozzles to apply pesticides and herbicides only where they are needed.

Here this manufacturer offers other aids such as BoomTrack technology that allows monitoring the terrain at all times and controlling the height as it passes through uneven crops. The idea once again is to apply that spray more precisely and use just the right amount of chemicals needed.

Efficiency. Those improvements bring another advantage: the efficiency and capacity of the tractors has also taken a notable leap. A tractor of this type is capable of managing between 10,000 and 20,000 hectares per year on its own, while the old tractors could barely manage a hundred hectares.

That power that we talked about earlier has a fundamental advantage: being able to use larger implements that cover more surface in the same amount of time. And that, of course, results in that aforementioned productivity that is now growing amazingly. A crucial issue if we take into account that the world is expected to have 9.7 billion people in 2050. There are going to be many more mouths to feed.

The future is mini tractors. The experts they think that the future of agriculture is not about making bigger tractors, but about having smaller tractors or robots that can handle tasks that require greater precision. Here the idea is the same: to automate production in this “precision agriculture”. 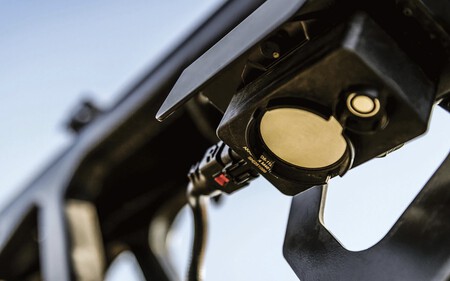 Cameras and processors embedded in the carbon fiber structure of the cabin allow computer vision and machine learning to be used to detect weeds in crops. Source: John Deere.

But. Perhaps we should put that “But” all in capital letters, because the truth is that although all this modernization has had an undoubted impact on the capacity and performance of these machines, it has also caused a clear consequence: the inability for the owners of these tractors can try to repair those machines when they break down.

This has generated a huge controversy that has had John Deere as its protagonist, one of the manufacturers that has always positioned itself the most against the right to repair. In the last times treat to offer services that theoretically alleviate (somewhat) the situation, but the reality is that in many ways the tractor remains more John Deere than its owners.

Let’s see who is the clever one who steals my tractor. And if not, tell the Russians who stole tractors from the Ukraine: when they tried to start them, they couldn’t because the manufacturer had remotely disabled them. Things have been so difficult for a long time that it has caused the appearance of Ukrainian firmwares -before the conflict, what things- that users, of course, are using to hack them.

Meanwhile, progress is being made in the EU, there is already a proposal to guarantee more freedoms and rights when it comes to repairing our devices, and the United States has also seen how the legislation has been more in favor of users. Apple has folded in its own way, and rents you a repair kit that weighs 35 kg to repair a battery weighing 30 g.

Car brakes are almost as polluting as combustion engines. And we don’t know how to fix it