Sony was very console-oriented: if you wanted to enjoy its video games, you could only do it on PS4 or PS5. Suddenly, they began to experiment and said “Hey, what if we also offer our games on PCs and mobiles?”. The success of the bet has been spectacular, and Sony already plans to go further in that strategy.

In the last conference for investors, Sony indicated that in 2025 about half of the games I release will be available on PC and mobile, while the rest will be destined for their PS4 and PS5. The revenue doesn’t lie, and the move to diversify the supported platforms is really working out.

Just a few months ago we told, for example, how the jump of exclusives like ‘God of War’ on PC was a success despite being a game released in 2018. The same had happened with ‘Horizon Zero Dawn’which since its launch on PC in August 2021 – it also came to PS4 in 2018 – has also become another triumph in Sony’s newborn PC video game catalog. 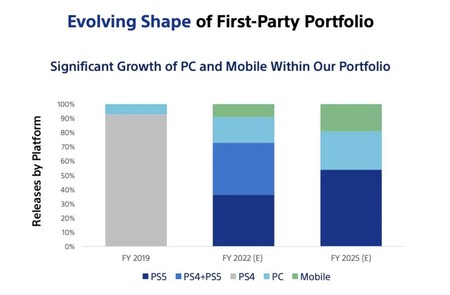 That strategy is being so effective that Sony is going to expand it. During the presentation, a diagram was shown showing how the number of titles that will be released for PC and mobile will be approximately half of the total that Sony launches in 2025.

Jim Ryan, president of Sony Interactive Entertainment, explained and VGC how “By expanding to PC and mobile, and let’s say… also live services, we have the opportunity to go from being a presence in a very narrow segment of the global gaming software market, to be present practically everywhere“. 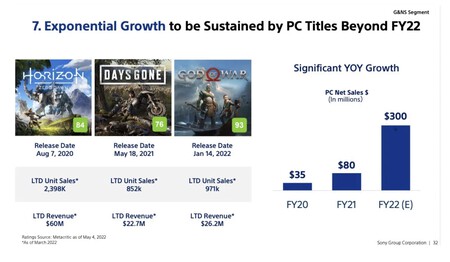 Sony’s Strategy has become much more diverse in recent times, and in fact at the end of last year the Japanese company acquired Valkyrie Entertainment, the studio that collaborated on games like ‘God of War’ or ‘Valorant’, but before that had bought Nixxes Software, which was responsible for the PC versions of the modern ‘Tomb Raider’ trilogy, for example.

Thus, the catalog of exclusives for Sony consoles will no longer be something less exclusive. The intention of the company is clear: to offer its IP both on consoles and on PCs and mobiles. Good news for Sony given the success of the strategy, but also for the entire gamer communitywhich will have access to these developments from different platforms.

All Spanish pharmacies will be able to legally sell compounds derived from cannabis. What no one knows is how