Microsoft presents a miniPC with ARM processor: this is Project Volterra

Microsoft has presented a minicomputer similar to the Mac mini. It is a team that, in a way, seems inspired by Apple’s smallest proposal: he is square, thin and has an ARM heart.

It is not a product for the consumer market with which those from Redmond intend to compete with those from Cupertino, but rather a development kit called Project Volterra with which they want to lay the foundations for the future of Windows.

The device, presented this week at the Microsoft Buildincorporates a processor Qualcomm Snapdragon (model not disclosed) and a Neural Processing Unit (NPU), three USB ports along with a DisplayPort and an Ethernet port.

As you can see in the video, the team stands out for its minimalist and stackable design, which is ideal for developers. In addition, the case, according to Microsoft, has been made with recycled plastic recovered from the ocean.

The kit will also come with a set of native ARM development tools. These include Visual Studio 2022, VS Code, VisualC++, Modern .NET 6, Classic .NET Framework, Windows Terminal, and Windows Subsystem for Linux (WSL).

Those from Redmond intend to promote with this kit what they call “intelligent hybrid computing” where services and applications will fall back on local CPU, GPU and NPU computing as well as cloud computing with Azure.

This movement could represent a shift in Microsoft’s position, which although it has ARM devices such as the Surface Pro X, had shown little interest in this architecture, continuing with its strong commitment to x86-64. 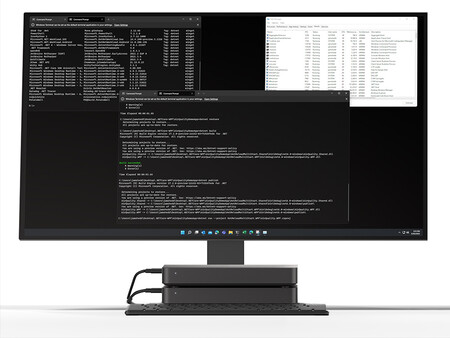 Added to this are the possibilities that would open up when creating applications for computers that make use of neural processing units (NPU), such as the one incorporated in many smartphones today.

These units, like the one Oppo developed for its phones, use artificial intelligence to deliver features how photo and video enhancements, real-time translation and else.

Microsoft is confident that NPUs will be embedded in almost all computing devices of the future. Consequently, they say, they are working to support this feature on Windows “end-to-end.”

Now, there are many unanswered questions. Will Microsoft take the ARM architecture seriously this time or will we be facing another proposal like the Qualcomm miniPC? Will processor manufacturers create ARM offerings for laptops and desktops?

And, perhaps the most important: will these efforts be enough to motivate developers to commit to this system? Those of Microsoft seem confident, although they do not provide specific dates, so we have to wait to see if these ideas come true.

In Xataka | Intel Opens to RISC-V Like Microsoft Opened to Linux: $1 Billion Supports Shift in Focus

The second era of space exploration is claiming an unexpected victim: flights on Earth

Savings ahead of rights: the teleworking “patch” for civil servants is now official

Savings ahead of rights: the teleworking "patch" for civil servants is now official

This prodigious map allows you to know how much sun your house will get at each moment: if you are going to buy or rent a house, this is a gem

Gorillas leaves Spain after less than a year: what his departure portends about the future of ultra-fast deliveries

Slack is a good tool to find work: its independent channels, a wealth of human resources