IKEA presents Dirigera, a hub for home automation that comes to us. The reason: use the Matter standard

IKEA has been entering the world of technology for some time, and today it has taken another step with the announcement of Dirigera, a new hub with Matter technology that will allow connecting and controlling future devices that take advantage of this ambitious home automation technology due to its interoperability.

And it is that Matter wants to be the solution to that tower of Babel in which the standards and protocols used in home automation have become. The new Dirigera – which means “to direct” in Swedish – will arrive accompanied by an IKEA mobile application, but in both cases we will have to be patient: neither one nor the other will arrive until October.

One standard to rule them all

The hub will direct arrives with a USB-C and an Ethernet connector, but also with Wi-Fi networks in 2.4 and 5 GHz bands. Rebecca Töreman, product manager, explains that with Dirigera and the new application “one of our focuses has been on strengthen and simplify the onboarding process by connecting new smart products to the smart home. 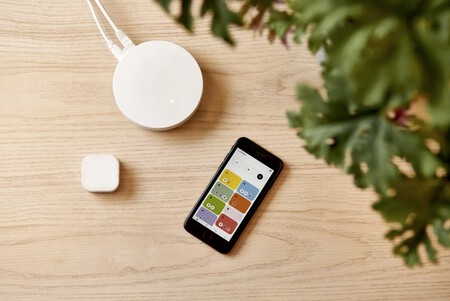 This directive indicated in the official announcement that “we have also added customization options, such as the creating different scenes with smart product presets for all your different activities and moments at home.

The Matter standard – which will probably arrive definitively also in October – promises to make all those smart devices we surround ourselves with more interoperable. No matter the manufacturer: the idea is that they can “talk” to each other.

The hub is a small disc with a diameter of 11.2 cm and a height of 2.7 cm, and will have the aforementioned Wi-Fi connectivity but will also support protocols such as Zigbee or Thread. In IKEA they do not clarify which products of their catalog of connected devices will be compatible, but they do indicate that they will be “most will be in the future“.

The sale price of this device is not known, but the company indicated that it would be higher than the current Tradri, which it is sold for 29 euros. The Dirigera, they say, will justify its “somewhat more expensive” price because it will have more features and functions. It will be interesting to see what this hubh actually offers when it shows up in October.

Vodafone gives away 3 months of OneNumber in these cases

A small phone and a great gift: buy the Xiaomi beast 12 and get the Watch S1 Active smartwatch for free for a limited time