50,000 tons of water and the size of a 15-storey building: this is the Super-Kamiokande, the super neutrino observatory

Having a name that sounds like a Japanese super robot or something like that entails a great responsibility, and although it is not something like that or anything like that, the truth is that the Super-Kamiokande It is a super structure (forgive the redundancy) with missions that are not common. Nothing science fiction, only science is what this huge neutrino detector located in Japan houses.

Specifically, this peculiar observatory is located on Mount Ikeno, buried one kilometer deep. Peculiar because what this structure detects are neutrinos, subatomic particles with such a small mass that they are capable of passing through solid matter and that makes them very difficult to detectalthough the final application of their study may include a better understanding of the stars and, ultimately, the universe. 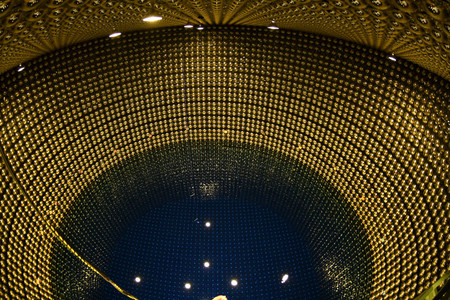 The Super-Kamiokande is also known by the abbreviation of Super-K, and we talk about it when dealing with the topic of the bluish Cherenkov radiation. In the Mozumi mine, under the city of Hida (in Gifu, Japan) is this structure of 40 meters high by 40 widemore or less like a fifteen-story building, being one of the most precise observatories that exist in the world.

Nuclear power plant reactors are not so buried, why is this observatory? This was already explained by the famous astrophysicist Neil deGrasse Tyson, when he was talking about Super-K and neutrinos, commenting that the observatory is so deep that there is enough distance so that the earth does not allow the passage of other particles.

“Matter is no obstacle to the neutrino. A neutrino could pass through 100 light-years of steel without even slowing down.” Neil deGrasse Tyson, astrophysicist

It is the successor to the Kamiokande and Kamiokande II, structures that were already capable of observing neutrinos, but not sensitive enough to detect proton decay, which occurs when protons decay outside the nucleus. And this was precisely the main update (and reason) to build a new Kamiokande, since it could detect proton decay and neutrinos, coming from the atmosphere, the Sun and supernovae anywhere in our galaxy. 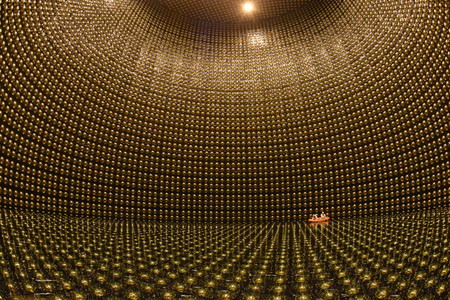 Some operators carrying out maintenance tasks on a raft on the water in the tank. Image: University of Tokyo

Water so pure it dissolves metal

So how do neutrinos, supernovae, bluish radiation, and so much water fit into all of this? Precisely, they are the basic elements of the workflow in the Super-K and its object of study. Let’s go by parts.

We have already mentioned a key element in the process: Cherenkov radiation. Summarizing much of what we already discussed at the time, when atoms are broken in a reactor (fission) the “pieces” (subatomic particles) are shot out with a lot of energy and a speed greater than that of light, generating an electromagnetic field and losing energy emitted as photons (light).

This light accumulates forming a cone (whose vertex is the point where the wave fronts meet), just like the sound barrier but in optics, and in the end this flash gives information about the direction and type of neutrino that arrives

Where is the water? Surrounding all that, in this case being 50,000 tons surrounded by about 11,000 photomultiplier tubes (Very sensitive light detectors, known as PMTs, which detect light and convert it into an electrical current so that it can be observed.) Its function is to cool, so that the nuclei are more stable and easier to control, as well as being the medium that makes other particles faster than photons (in this case, what is projected after fission).

Thus, what the researchers observe is the Cherenkov radiation produced by the neutrinos passing through the water. In fact, this water is also quite particular because it is pure, very pure.

We have always been told that drinking distilled water (that is, H₂O without anything else) is not good and it is, but this ultrapure water is even “worse” as it has the characteristics of both an acid and an alkaline, being able to get to dissolve metals. Why is this water so, so clean? Because for the flashes of the shock waves to reach these sensors, the water must be as clean as possible (which is achieved by constantly purifying it with ultraviolet light, which prevents any bacterial presence).

Thus, in the T2K experimentFor example, a neutrino beam is fired from Tokay to Kamioka (to Super-K), thus traveling 295 kilometers. With him they were able to observe for the first time neutrino oscillations (more or less, the changes they undergo when passing through matter), which can give clues about the relationship between matter and antimatter.

In Business Insider were able to interview three of the scientists working on Super-K and they explained both their purpose and the risks of working in such special facilities. Although the particles that they detect and study are tiny, as we said at the beginning, the gazes are actually more in the cosmos.

Doctor Yoshi Uchida (from Imperial College London) explained it with a practical example: in the event that a supernova collapses on itself and becomes a black hole, the Super-K it would be one of the few places on our planet “in which all the amalgamation of neutrinos that are released” from this and other similar events could be appreciated.

Uchida adds that it is estimated that there are supernova explosions every 30 years, so missing one of these means waiting several decades until another can be observed. Dr. Morgan Wascko (from the same university) highlights that the study of neutrinos is one of the possible ways to try to find out what happened to the antimatter after the Big Bang, since current models predict that matter and antimatter could be created in equal parts in this great explosion.

Dr. Matthew Malek had a few centimeters of his hair immersed for a long time in the ultrapure water and it ended up extracting all the nutrients from his hair, reaching his scalp and causing a terrible itching

As to the risks, Dr. Matthew Malek tells a rather particular anecdote. Uchida commented that ultrapure water is an excellent exfoliant and he did not say it in vain, given that Malek had a few centimeters of his hair submerged for a long time and this water had ended up extracting all the nutrients from his hair, reaching his scalp and causing him a sharp itch.

Obviously it was not voluntary. One of the maintenance tasks requires researchers to go on rafts (like the one we saw deGrasse on) and due to a failure of the access mechanism on one occasion they had to stay on it for a few hours. Lying on the raft, her hair touched the water.

“I woke up at three in the morning with one of the nastiest itchy hairs I’ve ever had. It was more itchy than when I had chicken pox as a kid. It was so itchy I couldn’t sleep.” Dr Matthew Malek

But beware, the Super-K will not take long to have a successor, since Wascko confirmed that an even larger tank is being worked on, which by the law of prefixes will be called Hyper-Truck and it will be 20 times larger than Super-K, with 99,000 photomultiplier tubes. Approximate date: 2026so we’ll see if in six years we see another grand opening for science and engineering.

Why program an app when you can draw it: this is how Microsoft’s new “No-Code” AI works

To understand inflation, you have to look at maritime transport: its rates have skyrocketed by more than 1,000%

Who said Marvel? Netflix has one of the most violent and original superhero movies in recent years