The first 500 Hz monitor is from ASUS and NVIDIA: a record refresh rate with a purpose that goes beyond

ASUS is not alone. For the creation of this monitor have partnered with NVIDIA. In addition to G-SYNC, this model takes advantage of NVIDIA Reflex technology for a purpose that goes beyond achieving maximum smoothness with images.

It’s not just the refresh rate, but the latency 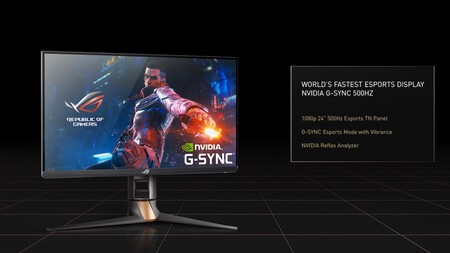 The characteristics of the ASUS ROG Swift 500 Hz are quite simple, despite the extreme of its numbers. We have a monitor 24 inches with TN panel with 1080p resolution (1920x1080px) and a refresh rate of 500 Hz.

ASUS explains that they have made use of the new esports tn technology, which promises a 60% better response time than traditional TN panels, in addition to reaching this record number in refresh rate. The Taiwanese manufacturer does not specify it, but in February of this year the panel manufacturer BOE presented a similar prototype with a 500 Hz screen and a response time of less than 1 ms.

The high refresh rate will serve to “get the maximum advantage over your opponent in esports titles such as ‘Counter-Strike: Global Offensive’, ‘Valorant’, ‘Overwatch’ and ‘Rainbow Six Siege'”, they explain from the company, leaving clear profile of person who could be interested in such a monitor.

To take advantage of these specifications will require a next-generation GPU. Nvidia points out that the monitor comes with a G-Sync Esports mode to increase the vibrancy of movements by allowing more light to move through the LCD crystals and also adopts Reflex Analyzer technology. We saw the latter in the ASUS ROG Swift 360 Hz monitor and it repeats its presence in this new model.

The presence of Nvidia Reflex is precisely what tries to justify the increase in the refresh rate. Displaying as many frames has a CPU impact, but the technology dynamically adjusts the render queue so that the CPU and GPU are in sync, being able to render more accurately with more frames per second. This helps relax the load and reduce latency. As Nvidia explains, it is possible to reach 50% less latency in games that support this feature.

ASUS has not yet shared data on the price or availability of this ASUS ROG Swift 500 Hz, presented within the framework of Computex 2022.

Tax Agency false payment SMS scam: what it is, how it works and how to identify and avoid this Income Tax scam

Bizum vs PayPal: differences and which one to use to send money to another person

E3 is not dead: the great video game event will return in 2023 with a hybrid format