Huge CPU coolers may have an expiration date. Copper poses a promising option

A group of researchers have published A study that proposes an alternative to the traditional dissipators: instead of these ‘lumps’ it is possible to use “a copper conformal coating” and “an electrically insulating layer of polymer” that extends throughout the device.

According to their data, this technique allows cool the processor as much or more than a conventional heatsink, but also eliminates the need to use those metal blocks and thus save space.

For years the need to cool our processor has made it necessary to use large heatsinks, huge metal blocks which, thanks to their conductivity, were a fundamental part of the system to keep CPU temperatures at bay. 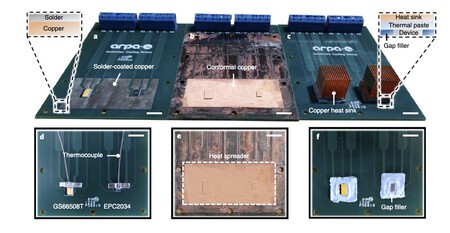 The images show the differences when using traditional heatsinks (on the right) or those layers of coformed copper that allow efficient cooling. Source: Nature Electronics.

Teams at the University of Illinois at Urbana-Champaign and the University of California at Berkeley who have worked on this new system believe there is a very promising alternative thanks to that combination of the coating and the layer of parylene, an organic polymer.

According to the study, the efficiency of the system is enormous and can increase the power of a device per unit volume up to 740%.

In fact, they state, “you can stack many more PCBs in the same volume when using our coating, compared to conventional liquid-cooled or air-cooled heatsinks.”

It remains to be seen whether the technology eventually makes its way to the PC—researchers are testing its performance on graphics cards, for example—but it could make our PCs and their components look different, and we could enjoy even more compact computers or with more space to house other components.

The unexpected consequence of the gas cap: Spain continues to burn without a brake in full price escalation