Amazfit is premiere. Last year we met the Amazfit T-Rex, an all-terrain beast with military resistance. Its successor is the T-Rex 2a model that promises to work at extreme temperatures, add GPS as a star function. We tell you all the features and specifications of the new model.

Datasheet of the Amazfit T-Rex 2

Born for the most extreme users 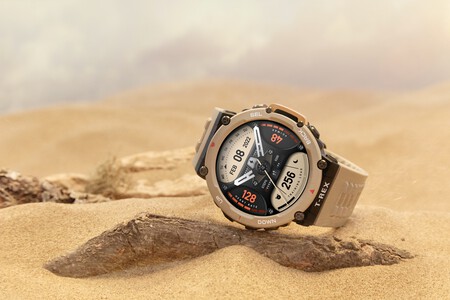 The T-Rex 2 is Amazfit’s toughest approach to the world of smartwatches. The GPS of this T-Rex 2 combines a dual band system and five satellites, to be able to use it outdoors with high precision. It also improves its resistance to waterwhich is now 10 ATM.

It also considerably improves the battery life, which goes from 390mAh to 500mAh. In this generation promise that is able to work for 24 days, despite having a larger screen and resolution. Of course, it has AMOLED technology again.

Regarding sports and health monitoring, we are talking about more than 150 sports modes, with new sports such as fishing, triathlon, hunting or surfing. It is designed to withstand temperatures between -40 and 70 degrees Celsius, so withstands extreme weather conditionslet’s practice the sport that we practice.

In addition to the sports modes, it monitors 24 hours of heart rate, blood oxygen saturation and stress measurement. It can even measure the respiratory ratesomething especially relevant in a device so oriented to extreme sports.

Price and availability of the Amazfit T-Rex 2

This watch goes on sale today on the official Amazfit website, at a price of 229 euros. They are almost 100 euros more than the T-Rexalthough we are taking a device with a more ambitious battery, better screen, more sports modes and the promise of being one of the leaders in the world of all-terrain watches.

The Xiaomi Band 7 against its rivals: this is how the most promising quantifying bracelet of the moment wants to keep the throne

Intel's radical change in its strategy to compete against TSMC: manufacture chips for other companies

The Google data region in Spain is already a reality: why it is important for companies and users