The AMD Ryzen 7000 with Zen 4 promise strong emotions and up to 5.5 GHz, but you will have to change the motherboard

We are in the middle of Computex 2022 and AMD has already put the cards on the table. The company has just presented its new desktop processors Ryzen 7000which will be the first to incorporate the new Zen 4 architecture and which we will see on the market in the fall of 2022.

As planned, the Ryzen 7000 will break the 5 GHz barrier, as planned, and will be developed using a five-nanometer process. A significant advance, without a doubt, but one that will have implications when it comes to integrating them into our computer, including the need to change the socket and, therefore, of base plate.

AMD has not revealed the portfolio of processors that will be part of the Ryzen 7000 family. What we do know is that they will be based on Zen 4, AMD’s new five-nanometer architecture. As detailed by AMD, the new processors will double the amount of L2 cache per core and feature higher clock speeds, offering “an increase of more than 15% in single-threaded performance compared to the previous generation” and TDPs up to 170W.

To prove it, the company has shown the performance of a pre-production processor playing ‘Ghostwire Tokyo’ and, during the test, said processor has achieved nothing more and nothing less than a 5.5GHz speed, thus matching the 5.5 GHz (turbo) of the Intel Core i9-12900KS. On the other hand, AMD claims that it is “30% faster than an Intel Core i9-12900K in a multi-threaded Blender rendering workload.”

But the news does not stop there. The Ryzen 7000 will also feature a new six-nanometer I/O chip that includes a graphics engine based on RDNA 2a new low-power architecture inherited from mobile Ryzen processors, support for DDR5 and PCI Express 5.0, and support for up to four displays.

These new processors are accompanied by a new platform / socket, AM5, successor to the long-standing AM4. This new socket has a 1,718-pin LGA design with support for TDPs up to 170W, dual-channel DDR5 memory and SVI3 power. It also has 24 PCIe 5.0 lanes and support for current and future graphics. The AM5 family will have three chipsets:

Now it is up to companies like ASUS, Gigabyte, MSI and company to develop motherboards with this technology, while PCIe 5.0 storage solutions will be handled by firms like Crucal, Micron and Phison. We will see all this in the fall of 2022. 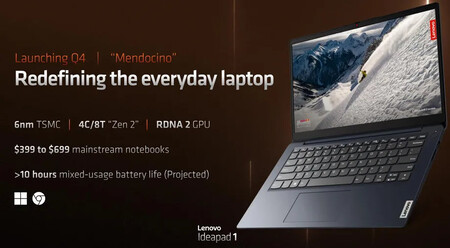 In addition to the new Ryzen 7000, AMD has revealed more information about the “Mendocino” family, the new mobile processors. These will be developed in six nanometer processThey will incorporate four Zen 2 cores, graphics based on RDNA 2 and seek to offer greater autonomy and performance in the lower price ranges.

Goal? Offer laptops with more than ten hours of autonomy at popular prices. We’ll see what it finally translates into. These “Mendocino” processors will arrive in the fourth quarter of 2022, so we will have to wait until then.

Roborock S7 Pro Ultra: the robot vacuum cleaner with 3D mapping that cleans automatically even after scrubbing and mopping